Marshallskis down from the summit of Australia's highest peak, Mount Kosciuszko, in October 2011 with an Air Force flag flying from his pack. 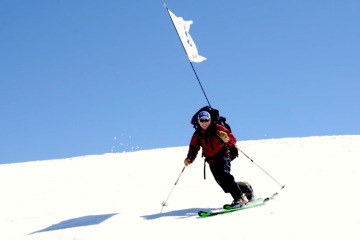 When the V-22 Osprey pilot isn’t flying, remodeling his bathroom, helping the Red Cross, speaking at schools, or working out, he’s running a first-of-its kind challenge to climb the highest peak on each continent.

Next April, Marshall, a 34-year-old Special Operations pilot with several combat deployments to bothIraqandAfghanistan, will lead a group of seven Airmen on their most impressive mission to date— to scaleMount Everest.

The bid for the top of the world would wrap up the U.S. Air Force 7 Summits Challenge. The group hopes to make history as the first military team to climb each continent’s highest mountain — and the firstU.S.military team to conquer Everest.

The Mercer Island, Wash. native and long-time mountaineer—who bagged 27 peaks as an Air Force Academy cadet—first considered an Everest attempt while visiting the mountain’s base camp in 2001 shortly after graduating from the Academy.

“I had this strong intuition that I needed to come back and climb Everest one day,” he says. “But, it needed to be for a reason bigger than just personal conquest.”

The reason came in 2005 when an Air Force MC-130, call sign Wrath 11, crashed in the Albanian mountains, killing nine, including several ofMarshall’s friends. “Wrath 11 hit close and shook me up,” he recalls. “I volunteered to ascend the mountains to search for survivors, but ended up helping coordinate the recovery. I felt powerless… every bit of me wanted to get up that mountain to help. I found out later there was no chance of survivors.”

These losses droveMarshallto find a way to help his fallen friends’ families. “Remember walking around a track to raise money for your school or charity? Well, I decided to take it vertical. For every thousand feet we climbed, we’d ask people to donate to the college education of these kids.” 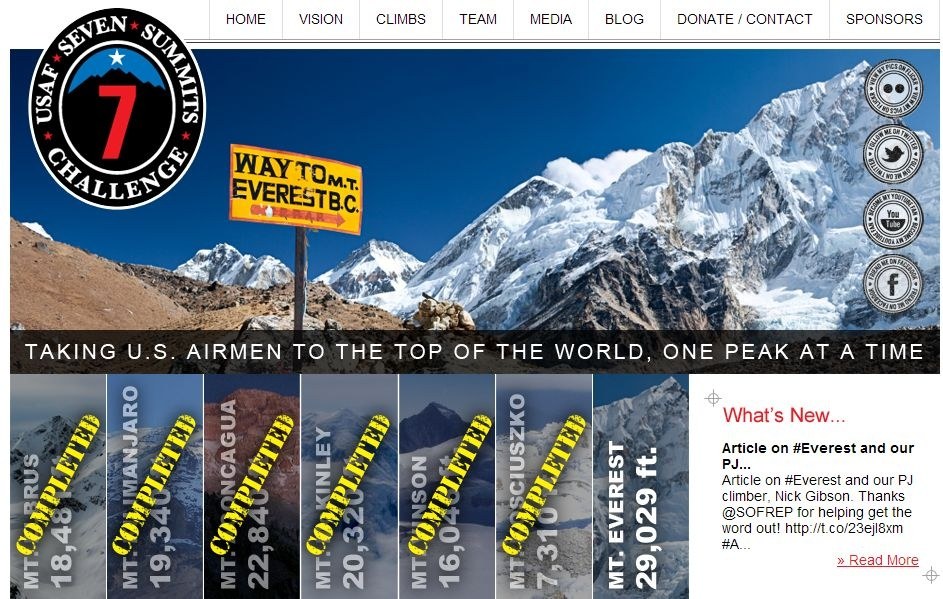 So, the Air Force 7 Summits Challenge was born, and the team has tackled six of the seven summits—Russia’s Mount Elbrus, Tanzania’s Mount Kilimanjaro, Argentina’s Mount Aconcagua, the U.S.’s Mount McKinley, Antarctica’s Mount Vinson, and Australia’s Mount Kosciuszko—and countless others in training. Team members mark their accomplishment with memorial pushups, in honor of their fallen friends, on each summit. So far, about 25 men and women have climbed with the team since the challenge began, and they’ve raised more than $60,000 for military charities like the Special Operations Warrior Foundation.

Though not funded or officially sanctioned by the Air Force, the military and climbing worlds seem to converge somewhat smoothly for the team. Marshall, who’s currently stationed inAmarillo,Tex., said commanders generally support the project thanks to the team’s intense planning and risk-mitigation process.

“Mountains are excellent leadership laboratories,”Marshallsays. “We get to work in small teams in extreme conditions. Climbing takes a combination of leading and following to survive together.”

And, sometimes these worlds collide. “I was on Mt. McKinley 24 hours from summiting when my unit told me via satellite phone that I needed to return immediately for a deployment,” he says. “Had to leave my team and haul ass back to base.” 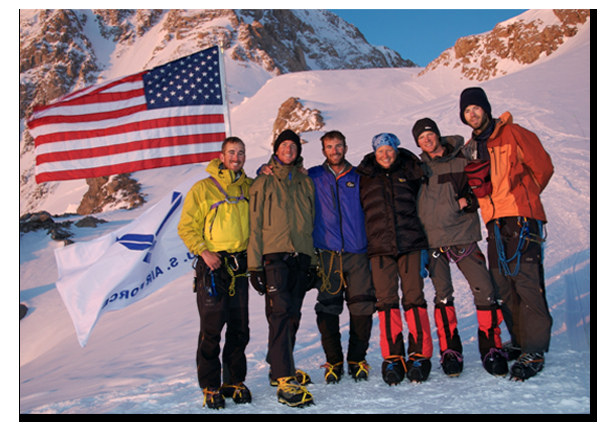 With luck, the realities of military life won’t interrupt the climb of a lifetime for the seven Airmen who’ve committed to the Everest summit attempt and are training at their bases across the country. The Everest team includes:

“Chadis aiming to become, what I believe will be, the firstU.S.serviceman with a combat-caused amputation to climb Mount Everest,”Marshallsays. “Several other wounded warriors and supporters also plan to trek with us to Everest base camp this spring.”

“Climbing these peaks is my way to deal with the pain and sadness that sits in my stomach from the losses of friends and colleagues,”Marshalladds. “I use physical exertion and time outside as my way to blast depression and sadness. After just a day hiking trails on the outskirts of town, I come home refreshed, reenergized, and looking forward to getting things done. If it wasn’t for this, I think the bad experiences would get the best of me. I hope that through this challenge we can help other military members use the outdoors and adventure sports to improve their emotional health.”

Yes, Major Marshall is a busy man, and he’ll get busier as April approaches. But as John Muir noted, “the mountains are calling and I must go.” Same for Marshall and his team.

Major Brandon Lingle served as a public affairs officer inIraqandAfghanistanand now is at Air Combat Command at Langley Air Force Base inVirginia. The views expressed here are those of the author and do not reflect the official policy or position of the Department of the Air Force, Department of Defense orU.S.government. 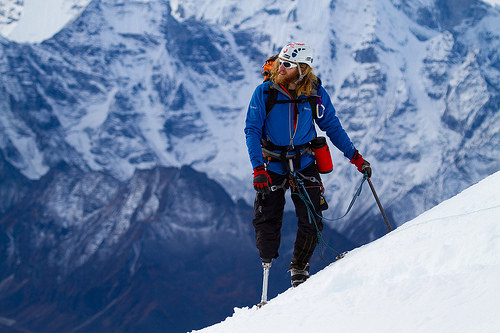 Eight tonnes of litter left onMount Everesthas been turned into 75 works of art.

An artwork commissioned for the "Everest 8848 Art Project" on display in Kathmandu. 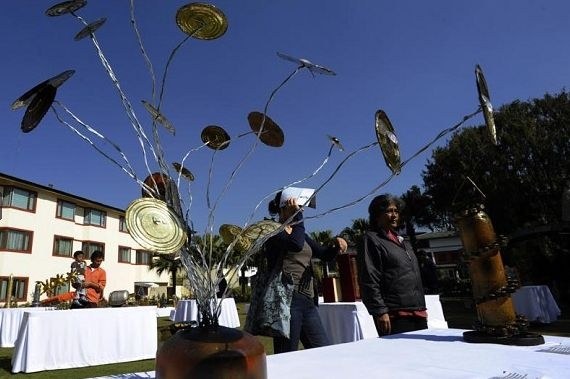 Matt Dickinson, author of the Mortal Chaos series and one of the Brits who has reached the summit ofMount Everest, offered a surprising insight into life on top of the world once when we met. He said: "When you get up to the very top of Mount Everest there is a remarkable amount of rubbish that has been left behind - old rope, discarded oxygen cylinders, broken tents, beer cans and bottles."

A group of artists have now turned eight tonnes of this trash - including the remains of a helicopter - into works of art and sculpture to highlight the issue of littering on the slopes of Everest. It took 65 porters and 75 yaks to carry down the rubbish from the mountain over two Spring expeditions.

The exhibition of 75 pieces commissioned for the 'Everest 8848 Art Project' is on display in the Nepalese capitalKathmandubefore it moves to Pokhara next week.

Project organiser Kripa Rana Shahi said: "We thought that this would help promote the artists as well as contribute to making Everest clean. We were happy to get the trash and (the waste collectors) were happy to get rid of it."

Fifteen Nepalese artists spent a month preparing pieces for the exhibition. In one of the works, by painter and poet Sunita Rana, white shards of aluminium from drinks cans are fashioned into medals signifying the bravery of mountaineers, while black metal tent poles are transformed into a wind chime.

Group of artists is staging an exhibition of sculpture made from tonnes of trash collected onMount Everest, highlighting the toll that decades of mountaineering have taken on the world's highest peak. Discarded oxygen and cooking gas cylinders, ropes, tents, glasses, beer cans, plastic and even the remains of a helicopter make up 75 artworks commissioned for the "Everest 8848 Art Project" on display in Kathmandu.

In another, remains of a helicopter which crashed in 1974, while carrying food for Italian climbers, are incorporated into an idol of the Hindu God Ganesh. The artworks range in price from £12 to £150,000, and several pieces have already been sold. 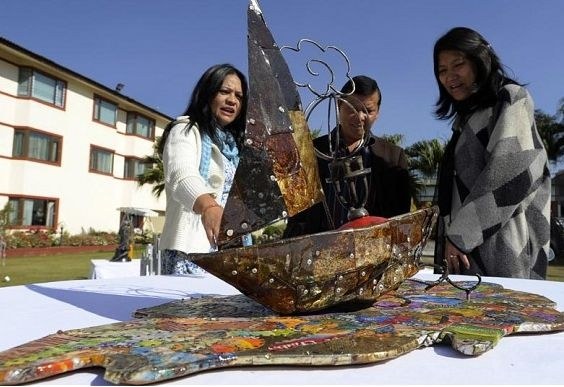 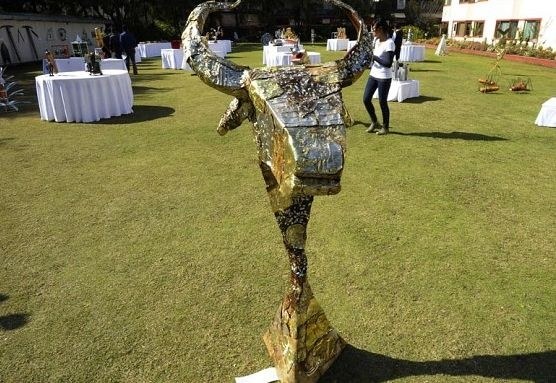 "As the word on the Everest garbage spread, it tarnished the image of our country. I was saddened when the foreigners talked about Everest as if it were a dumping site," said Everest Summiteers Association president Wongchu Sherpa. "We have recommended that if a climber is found littering the mountain, he or she should be banned for five years from climbing," Sherpa told AFP. 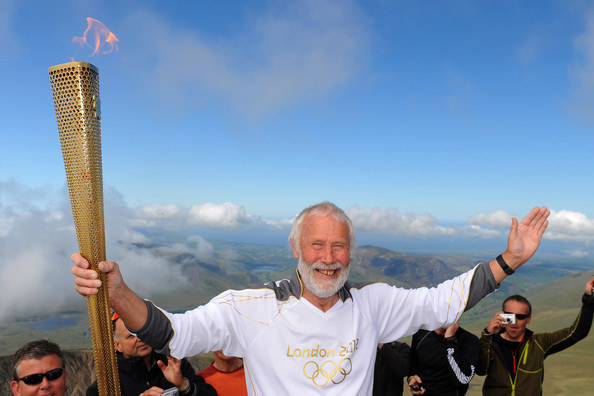 Famous mountaineer Sir Chris Bonington is delighted that the auction of his Olympic torch has raised £13,550 for a charity helping people in Nepal.

The mountaineer climbed Snowdon in North Walesas part of the torch relay route and sold the torch in a sealed bid auction to raise money for Community Action Nepal, which is led by his fellow Cumbrian-based mountaineer Doug Scott.

Being a small charity their overheads are minimal, so it means that practically every single penny raised goes to the recipients who are the people in these little villages in the foothills of the Himalaya”, Bonington said.

Sir Chris added “I’m very pleased with the amount raised. I’m sad to see it go but I felt that, rather than hanging on to it, it was much better if it could do some good.”

The money will be spent on several projects including the building of shelters on trekking routes and constructing new schools.

“Quite a few porters are left to fend for themselves and have died from exposure,” Sir Chris said.

The auction closed on Wednesday during a large charity.

The torch will be on display at the Royal Geographical Society.

"In the Footsteps of Legends" is an expedition to the Geographic South Pole to celebrate the 100th anniversary of Captain Scott's epic expedition in 1912. The team are raising funds for two important charities, Walking with the Wounded and Alzheimers Research UK.

The largest group within the expedition team is made up of soldiers who were wounded whilst on active duty in Afghanistan in 2010. Despite their having suffered a range of injuries, including major head and limb wounds, they are now determined to inspire others, and raise funds for causes dear to their hearts, by undertaking this gruelling physical challenge, which they aim to complete shortly before returning to serve another tour in Afghanistan.

The expedition is being co-led by Justin Packshaw (himself a former Captain in the British Army) and David Hempleman-Adams. 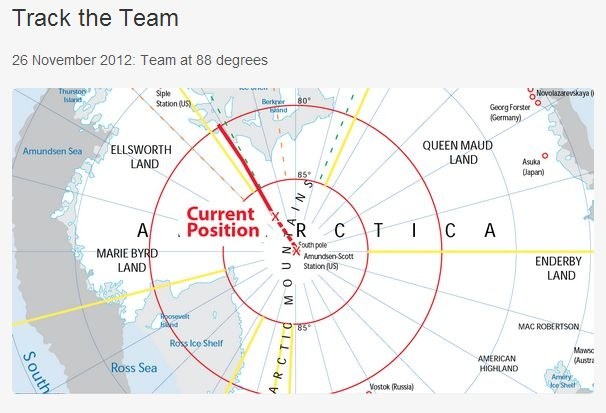 On 19 November 2012, the team will set off to walk In the Footsteps of Legends, and try and reach the Geographic South Pole.

They will walk 140 miles across the ice from Union Glacier: across a barren icefield, barely touched by humans, dragging a sled laden with food, tent and clothes. It will take 19 days of arduous trekking to reach the bottom of the earth.

The expedition will begin at the 88 degrees South, which is 140 miles from the Geographic South Pole.

The terrain between 88 degrees South and the South Pole itself is some of the most extreme on the planet.

Despite this, the team will ski unsupported, pulling all their equipment themselves, on specially designed pulks in temperatures as low as -40°Celius. The team is going to be away for four weeks.

The team is being lead by explorers David Hempleman-Adams and Justin Packshaw. The aim is to raise over £1 million for the charities Walking with the Wounded and Alzheimer's Research UK.

HRH Prince of Wales is the Colonel-in-Chief of The Royal Dragoon Guards and has sent this message to the team... and the Prime Minister has also sent a message of support. 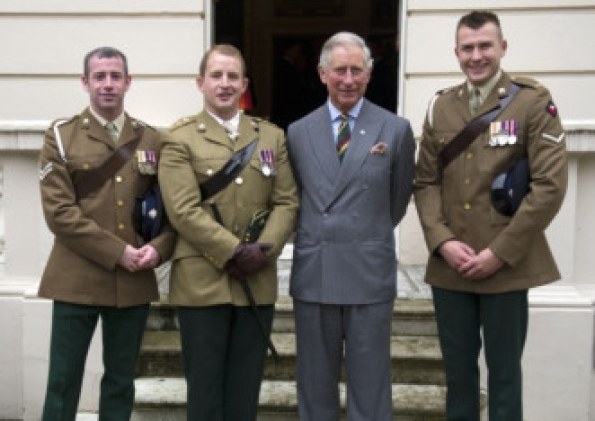