Climbing Himalayan mountains in the Fall can be risky at best. Each day is shorter, it is progressively colder and winter looms. So every summit, especially Everest, is highly valued by the climbers. This year, Fall 2010, we saw two summit ...

Climbing Himalayan mountains in the Fall can be risky at best. Each day is shorter, it is progressively colder and winter looms. So every summit, especially Everest, is highly valued by the climbers. This year, Fall 2010, we saw two summit successes of very different types.

First up is the only Fall Everest summit since the Fall of 2008. Eric Larsen and his small Sherpa team summited Everest at around 6:35 AM local time on October 15th. They broke trail and fixed their own ropes on the way to the top. Eric reported in an emotional audio post from the summit that they summited . He later reported they threaded the needle of a tiny weather window descending in white-out conditions to the South Col. He promised more details upon return to Base Camp.

There had been other teams on both the north and south but all abandoned plans throughout the season. Dangerous snow conditions were the culprit on the north side and running out of time was cited on the south. But Eric, wanting to complete a year long goal to ski to both poles and summit Everest on behalf of his "Save the Poles" mission persevered. Eric's stated goal:

"This expedition will tell the story of these remote places so we can better understand how our actions affect the poles and ultimately the planet," Larsen says. "We all need to be reminded that we must act now to stop global warming."

Another impressive summit was the Soldiers to the Summit team lead by Everest summiter and blind climber Eric Weihenmayer. They put 8 soldiers on the summit of Lobuche, 20,075′, which is often used for acclimatization for Everest climbs. From their site, Soldiers to the Summit: The goal of the Expedition and World TEAM Sports is to demonstrate to everyone that great things can be achieved no matter how high the obstacles.

We did it! On October 13th, eight of our injured soldiers reached the 20,075-foot summit of Lobuche. These men and women overcame their injuries, gave it their all, and achieved a great victory—not only for themselves but for other veterans, disabled people, and all of our sponsors.

Congratulations to all these climbers. See the previous report on their expedition.

The fall season is not over with climbs on Pumori, Ama Dablam and a few other Himalayas mountains underway.

Arnette is a speaker, mountaineer and Alzheimer's Advocate. He is climbing the 7 Summits starting with Mt. Vinson in November 2010 to raise $1 million for Alzheimer's research. You can read more on his site. 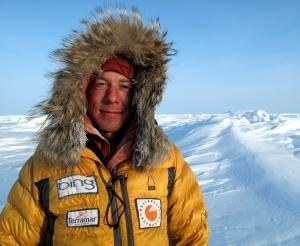