My first time on Elbrus was in 1967. It was part of a climb to commemorate the 50-year anniversary of the Soviet Union where 2,500 people would attempt the summit en masse in a grand spectacle called “Kabardikiada”. At the time, ...

My first time on Elbrus was in 1967. It was part of a climb to commemorate the 50-year anniversary of the Soviet Union where 2,500 people would attempt the summit en masse in a grand spectacle called “Kabardikiada”. At the time, I was studying to be a climbing instructor. The instructors-in-training at my school had been assigned a total of around 600 climbers – about 20 each. They were from all over the Caucasus region; from a number of different schools, clubs and organizations. As an aspiring climbing instructor, I was entrusted with a group of young climbers from Kabardino-Balkaria (a republic in southwestern Russia, just north of the Greater Caucasus Mountains), many of whom already had a few climbs under their belt. They arrived motivated and relatively well-prepared, but they were still very young. In the briefing I was given, it said that they were all at least 16 years of age (at the time, you had to be 16 to climb Elbrus), but just looking at their faces I could tell they were younger.

We put them through some training, but it was fairly minimal. It was raining most of the time.
The forecasts we were getting kept saying that July 29 would be the ideal day for the climb, so we began planning everything around this date. The day before the climb, we made our way to “Ice Base”. Our team was led by Honored Master of Sports (a title bestowed to esteemed athletes in the USSR) Aleksey Ugarov, one of the greatest climbers of that era and leader of the first expedition to conquer Peak Korzhenevskaya (7,105 m, Tajikistan).

I remember seeing Aleksey once in 1953. He was running around in nothing but leather shorts barking commands into a megaphone, trying to drive his team of young climbers onwards. It was quite a spectacle to behold, especially since the team hadn’t managed to get in the acclimatization it needed (due to bad weather) and most of us could barely move our legs.
Ice Base deserves a whole other story of its own. More than 2,000 people had been crammed into camp there. There were hundreds of tents, kitchens filled with provisions, a movie theater, a photo studio and a number of other buildings. We had initially been promised catering, but were instead treated to dry rations due to the heavy snowfall (the firewood was soaked). To us at the time, the food seemed fit for a king: chocolate, sour cream, fruits and other delicacies we had never even seen before in our lives.

On the morning of July 28, we all took part in a movie that was being shot about the expedition before setting out on an acclimatization climb. Amidst a backdrop of rockets being fired and shouts of “Hooray!” we began our ascent, only to get caught up in the deep snow within the first 10-15 meters. Many of us fell face-first in the snow while the cameras were rolling. A helicopter circled overhead, filming us from above as we waved our flags and banners. One small group of people arranged themselves to spell out “50 лет СССР” (50 years of the USSR). We all got tired pretty quick, and then came a strong snowstorm. We descended back down to our tents without getting in the proper acclimitization.

We began our attempt at the summit on July 29 at 2 AM. Our long “centipede” worked its way up to the “Refuge of the Eleven” where we were met by a crowd of climbers who had been camping out there. Most of our team made it to the refuge, but afterwards, our ranks started to dwindle. People were beginning to collapse; their legs just giving out on them. Many of the climbers who were falling were athletes: fighters and weightlifters that were not used to giving up. A volunteer rescue team was there to bring them back to their senses or to simply carry them back down the mountain. There were others who simply sat down in the snow, looked at their instructors and said that they couldn’t go any further. Many of the people we were forced to leave behind asked those of us left standing to take their “tokens” to the summit.

Before the climb, each of us had been given a token: a small aluminum disc inscribed with our name, hometown and date of birth.

At the summit, we were to drop this token into a metal box. We were told that this box would be reopened in the Year 2017 – the 100-year anniversary of Soviet power – and that each of the climbers who was still alive would be invited to a huge gathering to commemorate the climb. So it wasn’t really a matter of honor or pride; they just wanted us to drop their token in the metal box so they would be invited to the 100-year anniversary party and maybe receive some sort of award.

We ascended the mountain slowly but surely, losing some of our comrades along the way. Most of my young climbers from Kabardino-Balkaria had been forced to throw in the towel. As we approached the Pastukhova Rocks, only 4 remained from my original group of 20: a father and his son who was studying at the Nalchikskiy Institute and two young girls who simply refused to give up. At one of our stops along the way, one of the girls passed out, toppling over like a felled tree. I barely managed to catch her. I squeezed lemon juice into her mouth to revive her and sent both of the girls back down to the gathering point below, essentially passing them on to another instructor. The three of us still remaining pressed onward, gathering tokens along the way. I made it to the top along with the father-and-son duo. We dumped a handful of tokens into the metal box and had our pictures taken. We also had the chance to see a motorcycle that Mikhail Kakhiani and some of his friends had hauled up to the peak earlier. On the summit, rallies were held, speeches were given, shouts were heard and flags were waved. Everyone was having the time of their lives. All of my fellow instructors made it to the summit as well. We chatted for a while before leading what was left of our teams back down. The weathermen had been right on the mark. That was pretty much the only day we could have made an attempt at the summit. When we got back to the stadium at the Itkol Hotel below, we were given a hero’s welcome, as if we had achieved something incredible. There were flowers, fruits and drinks (only of the non-alcoholic variety for the climbers). I’ll remember everything that happened that day for a long time to come. My young climbers thanked me for teaching them and for helping them along. A few of us exchanged addresses and stayed in contact for a number of years following our climb.

So that’s how it all went down. My first climb on Elbrus was truly a once-in-a-lifetime experience. 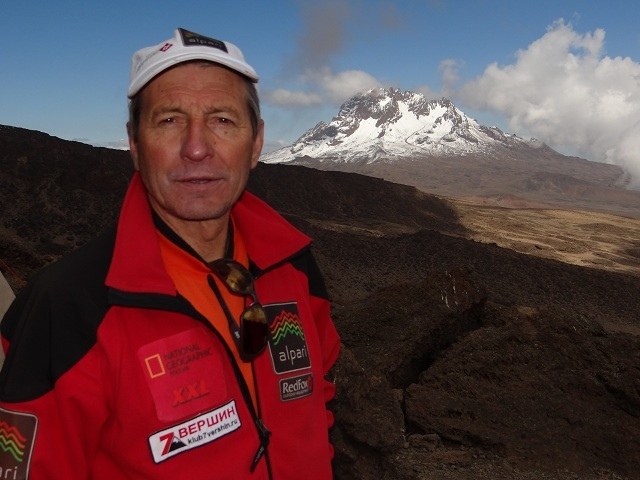