It has been a very busy few months for me and my family. In a recent development on the dispute of Nepal Mountaineering Association, the Government of Nepal has posted me once again as the President of NMA until such time that another election can be held and the position passed on. The Ministers' Cabinet of the Government of Nepal held a special meeting at Kala Patthar Plateau (5,542 m) on December 4th near Mt. Everest Base Camp, to raise awareness about the impact of Climate Change on Nepal. Nepalese Prime Minister Madhav Kumar Nepal and 23 other ministers attended the meeting, where a 10 point ‘Declaration’ was released which calls for concerted actions to minimize adverse effects of climate change in the Himalayan region

The meeting held at such a high altitude was substantial in drawing attention to the dangers of climate change and global warming on the Himalayas, days before UN negotiations on climate change in Copenhagen. This meeting gained worldwide media coverage and it showed the commitment of the Nepalese Government towards the burning issues of Climate Change and the mountain environment. 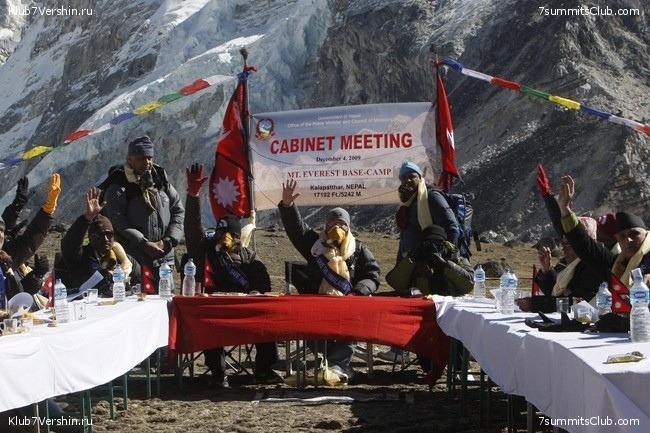 Following this, Summiteers Summit to Save the Himalayas was organized by the Government of Nepal in Copenhagen to mark the International Mountain Day on December 11, 2009. Led by honorable Minister for Forestry and Soil conservation, Mr. Deepak Bohora, this rally was an accompanying event in the 15th session of UNFCCC conference. The objective of this program was to draw attention of international community towards the Himalayas and the impacts of Climate Change on the Himalayas so that the important role of the Himalaya mountain region in regulating global climate regime can be well recognized by all.
Government ministers and mountaineers from Nepal in Copenhagen (image: Hank Hwang, Chinese Taipei Mountaineering Association)

This event was a humble request to the world community to pay greater attention to the challenges of climate change in the mountains and to value their unique contribution to the global ecology. Also please visit :
http://www.guardian.co.uk/environment/video/2009/dec/10/copenhagen-sherpa-himalayas

On behalf of the Government of Nepal, as President of Nepal Mountaineering Association and Union of Asian Alpine Association, I had the great pleasure to co-ordinate the gathering of International Mountaineers from all over the world in Copenhagen for this event. A large number of people (estimated between 900-1200 by the Copenhagen police), including 35 renowned Nepalese Mt.Everest summiteers, many international Mt.Everest and 8,000 m peaks summiteers, celebrities of International repute, Nepalese living abroad and supporters from all over the world with a concern for global climate change gathered and marched together in the streets of Copenhagen to highlight the challenges faced by the Himalaya in the context of global warming.

The event also included other activities such as the “Himalaya- Changing Landscapes” photo exhibition; a cultural program by a Sherpa cultural group and a Danish band; speeches by mountaineering leaders and icons and the issue declaration to Save the Himalayas. Nepal Mountaineering Association along with several organizations such as Nepal’s National Trust for Nature Conservation, ICIMOD, WWF, Nepal Tourism Board, the World Bank, Danish Embassy, Union of Asian Alpine Association, ESA, and NRN joined hands with the government to launch this special event.

I thank all the participants for their concern and support towards saving the Himalayas and the mountain environment.

Just ahead of the Climate Change talks in Copenhagen, my son Dawa Steven along with renowned mountaineer Apa Sherpa, 19th times Mt.Everest Summiteers went on a ‘European Expedition.” On expedition they visited 10 major European cities. They attended various events and exhibitions, participated in many talks, gave lectures and presentations, met high- profile politicians and celebrities, and spoke to the media delivering the message from Himalayan communities who are on the front line to face the impacts of climate change. The ‘European Expedition’ was part of the Climate for Life campaign of WWF and directed to raise the profile of the Himalayas in the global climate debate. Dawa Steven and Apa are both Ambassadors for the Climate for Life campaign.

Starting from Prague, Dawa Steven and Apa passed through Brno, Bratislava, London, Viterbo, Gland, Chamonix, Vienna, Brussels, Paris and finally to Copenhagen. In London, Dawa Steven spoke to Members of Parliament at Westminster. In Gland (Switzerland), Dawa and Apa met Jim Leape, Director General of WWF International and were awarded “Leaders of a Living Planet” the Highest award for conservation given by WWF. Dawa Steven also informed the Austrian President about Nepal’s problems in the face of Climate Change and handed over the summit rocks to the President. Similarly in Brussels (Belgium), Dawa Steven spoke at a Climate Change rally to 13,000 people and participated in round table talks at the European Parliament where members of Parliament, South Asian Nation Ambassadors and officials of the European Commission were present. In Paris, they handed over the Prime Minister’s Letter to the Chief of Protocol of the President’s Office. Also please visit:
http://www.climate4life.org

Looking forward to an exciting New Year, we also have many programs planned.

Mt. Dhaulagiri Golden Jubilee will be celebrated on 28 May 2010 and on the same day Save the Himalaya Conference will be held. On 29 May 2010, various programs will be organized to celebrate International Everest Day.

Conforming to the success of Imja Tsho Action Event 2009, Dawa Steven Sherpa and his iDEAS team will organize Imja Tsho Action Event 2010 this year also on 10 June 2010. The run titled Beat the GLOF Action Run will start from Imja Lake (5010 m) and end at Khumjung Village covering a total distance of about 35 kilometers. Following the Action Run on 11 June 2010 will be Save the Himalaya – Khumbu Festival at Khumjung Village to focus on the mountain communities, the mountain environment and the impacts on them due to climate change. Also please visit www.theuiaa.org/act_mountain_protection.html

Eco Everest Expedition 2010 will take place this year with a special program. This year Dawa Steven and his Eco Everest Expedition team has planned to collect and bring down garbage from the Mountain, including at altitudes as high as 8000 m and above. The plan is to create a team of 10 Sherpas to clean up garbage and debris from such high altitudes. This year’s expedition targets to bring down 1000 kgs of debris from high altitude (above Camp 2) and 6000 kgs of debris from Camp 2 and below.

I once again hope to receive your support and encouragement for our efforts in the New Year.