Romanian 15-year-old Crina Popescu, a member of the Altitudine Sports Club of Rasnov, on January 24 climbed the Carstensz Pyramid, at 4,884 m Oceania’s highest mountain summit located in Indonesa, becoming the world’s youngest alpinist to climb this mountain.
The previous record was held by US Samatha Larson, who ascended the peak in 2007, at 18. Cristina Popescu is also the first Romanian ever to climb this peak.

The Australia-Oceania 2010 five-week expedition mounted by the Altitudine Sport Club set off to conquer three summits: Kosciuszka, Australia’s highest; Giluwe, at 4,368 the highest volcano of Oceania, and Oceania’s highest summit Carstensz Pyramid. Popescu managed to climb all the three peaks during the expedition.

The success of her feats has brought the young mountain climber one step closer to achieving her dream of becoming the world’s youngest climber ever to successfully walk this route.
Popescu will continue her expeditions in the second part of the year, when she sets to conquer two important peaks of the two routes: Pico de Orizaba of Mexico, at 5,636m the highest volcano in North America, and Denali, at 6,194 m the highest peak of Alaska, Altitudine reports in a press release ahead of their return home.... 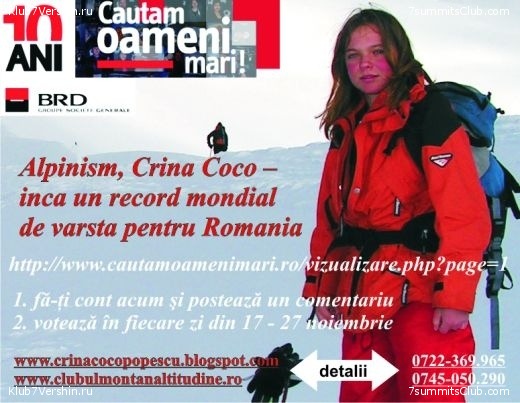