On December, 9th the main part of winter expedition on К2 has taken off for Pakistan. Follow news on a the site k2-winterclimb.ru

Unfortunately, not all of the team were able to be at the conference - climbers were shipping at the Customs Office at the airport during that time. Guests of press conference congratulated with birthday 73-years expedition' senior coach - Nickolay Cherny. Questions asked to participants dealt with the various details of the project: the conditions in base camp, the weather conditions on the mountain, the line of the future route, the food, gear, how to reach the base camp, about the winter ascents, the complexity of the expedition organization as a whole. As the team as the sponsors showed a high faith in the success of the expedition. Video conference led by crew of NTV PLUS.

On December, 7th leaders of the Organizing Committee of Sochi-2014 has given a reception for members of the Russian winter expedition on К2. About hundred employs of the Committee of Sochi-2014 were present at a meeting. The president of Organizing Committee Dmitry Chernyshenko has handed over to the command of climbers an official flag of the Winter Olympic Games Sochi-2014. The team hopes to hoist the colors the Olympic Games on top К2.

Solemn moleben (prayer service) about members of winter expedition on К2 was held in Moscow in the Orthodox Temple of All Sacred on Kulishki. The command takes with itself an icon of Kazan Divine Mother which always was together with them in each expedition, since 2001 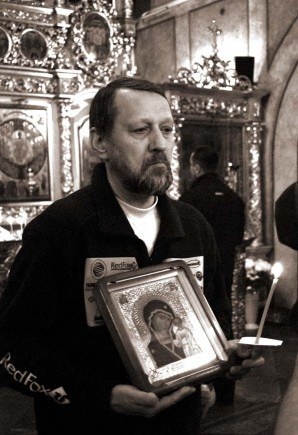