Over the past few years, the Crimean guides of the 7 Summits Club have made several original routes intended for members of our training programs. . As a result, we can note that Alexander Marinkevich and his friends, with our help, made a certain contribution to the development of climbing in the Crimea. We offer you an overview of the new routes from the 7 Summits Club.

Koshka (Cat) rock massive  is located near the village of Simeiz. Simeiz is an ideal place in the Western part of the Crimean mountains in terms of a combination of rock climbing and sea recreation. The rocks here come close to the shore. 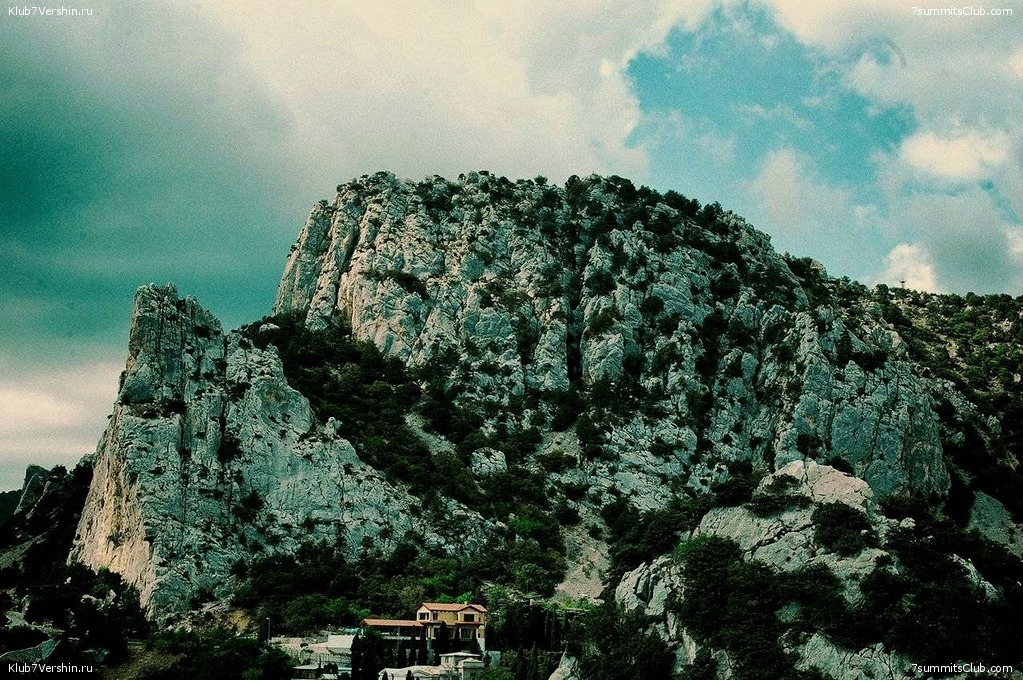 In Soviet times, high-level competitions, including international ones, were held on the Koshka. Later, the period of arrangement of permanent (multi-pitch) routes began. Now there are up to 80 routes on the whole rock massif. The very first routes, if you go from Simeiz, pass along the Eastern face. Here on the positive terrain are the easiest routes available (under the guidance of guides) for novice climbers.

The route "Kenya" (4-5Б)  was created by the guides of the 7 Summits Club specifically for preparing amateur climbers for steep wall ascent  on Mount Kenya.

Uch-Kosh is a long valley by the standards of the Southern coast (a gorge), with a length of about 5 kilometers. At the bottom of the river (stream) Bala flows. The gorge goes to the suburb of Yalta Vasilyevka past the sanatorium "Dolossy" and the village of Sovetskoe. Uch-Kosh is one of the closest rocky areas to Yalta, convenient for entrances. From the city center it is no more than 15 kilometers.

However, strict water protection regime for a long time limited the mountaineering and climbing development of the area. The guides of the 7 Summits Club were the first to make multi-pitch routes here: "Gornyashka" and "Louis-Philippe". The latter is named after one of the most active members in the Crimean programs of the 7 Summits Club. 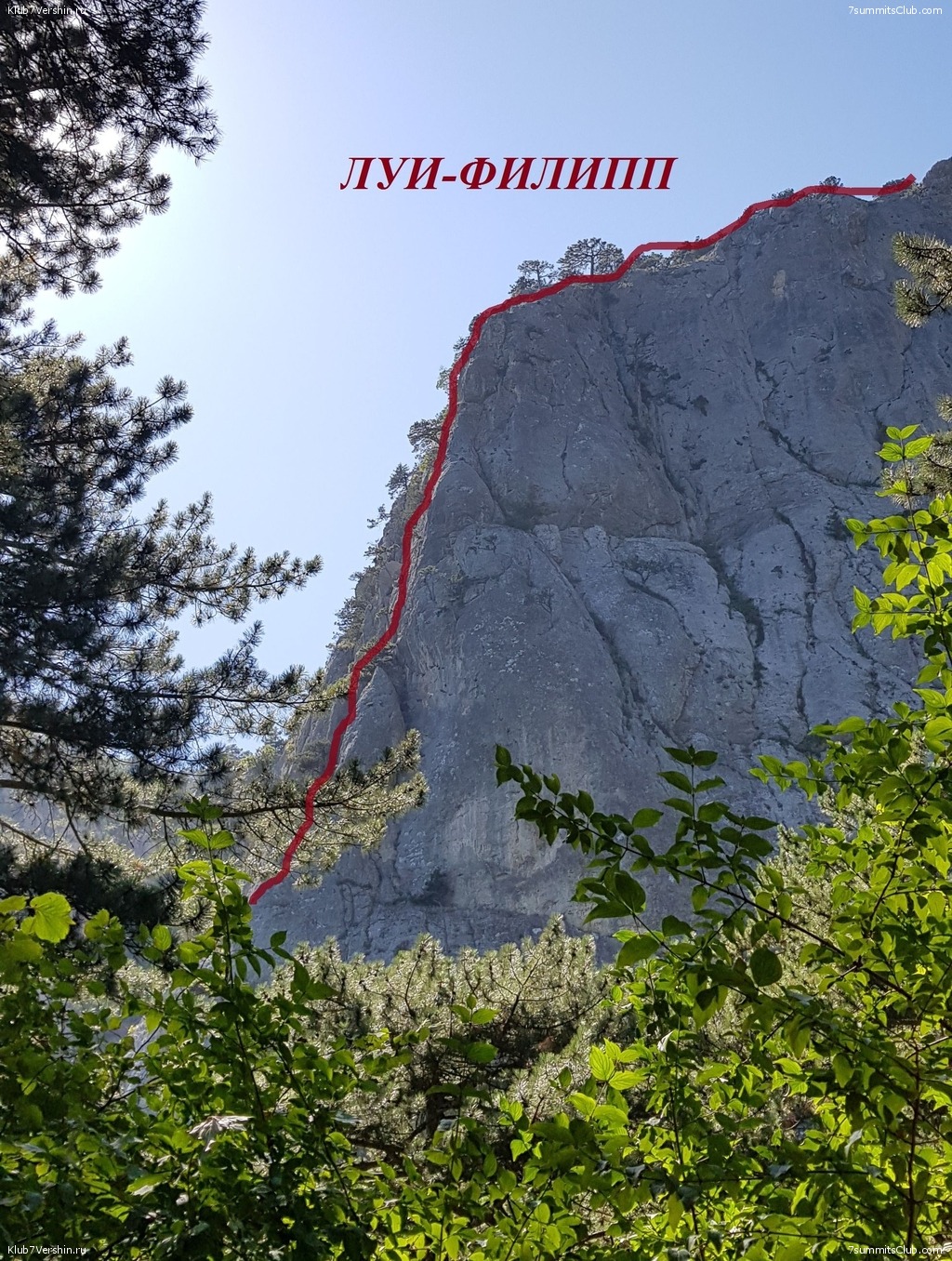 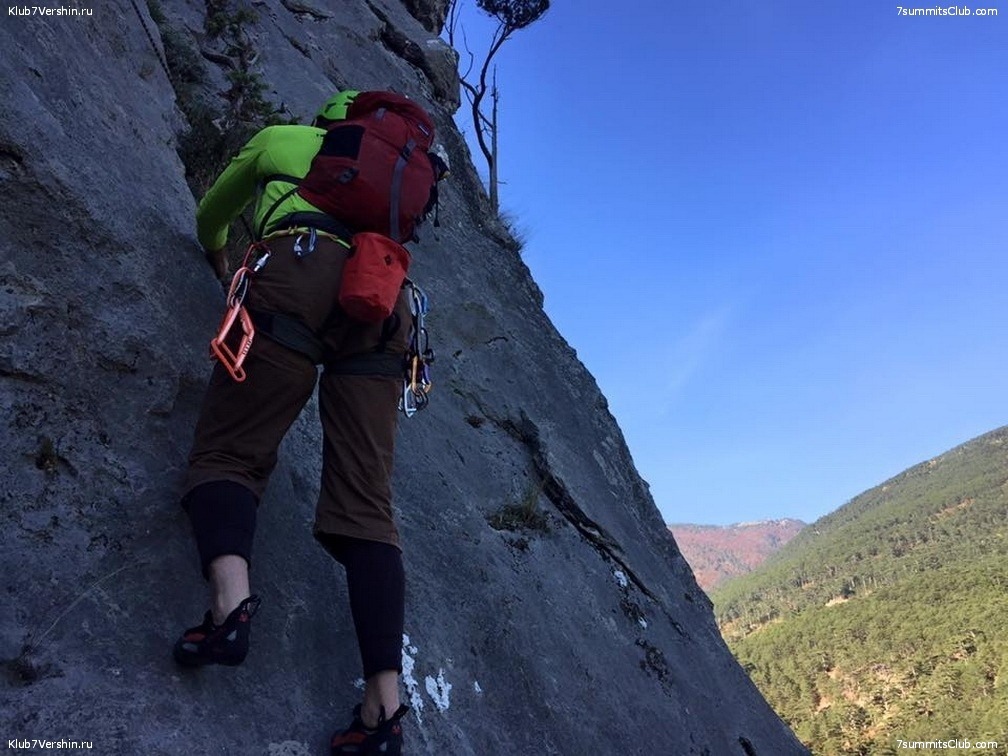 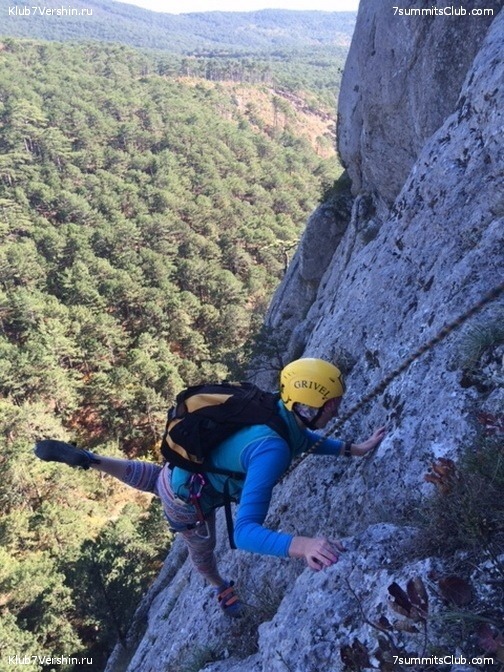 At the word Shaan-Kai, the climbers ' blood begins to rise with adrenaline. I immediately remember the iconic overhanging wall, which could have been stormed by a few people. 250 meters of negative slope, a rare phenomenon on a global scale. For a long time, either trails or routes of extreme complexity led to the top of the rock massive. Until, finally, the guides of the 7 Summits Club did not pay attention to the fact that along the edges of the overhanging wall there are areas where it is quite possible to find beautiful routes. Last year, in 2019, Alexander Marinkevich completed work on two routes at once, one on the Western part of the wall, the other on the Eastern part. They were dedicated to the founders of the 7 Summits Club and were named "Alex" (Abramov) and "Lucy"  (Korobeshko) respectively. The route "Lucy" is a little easier than "Alex" and has already been tested by members of the Mountain school of the 7 Summits Club. We recommend it! 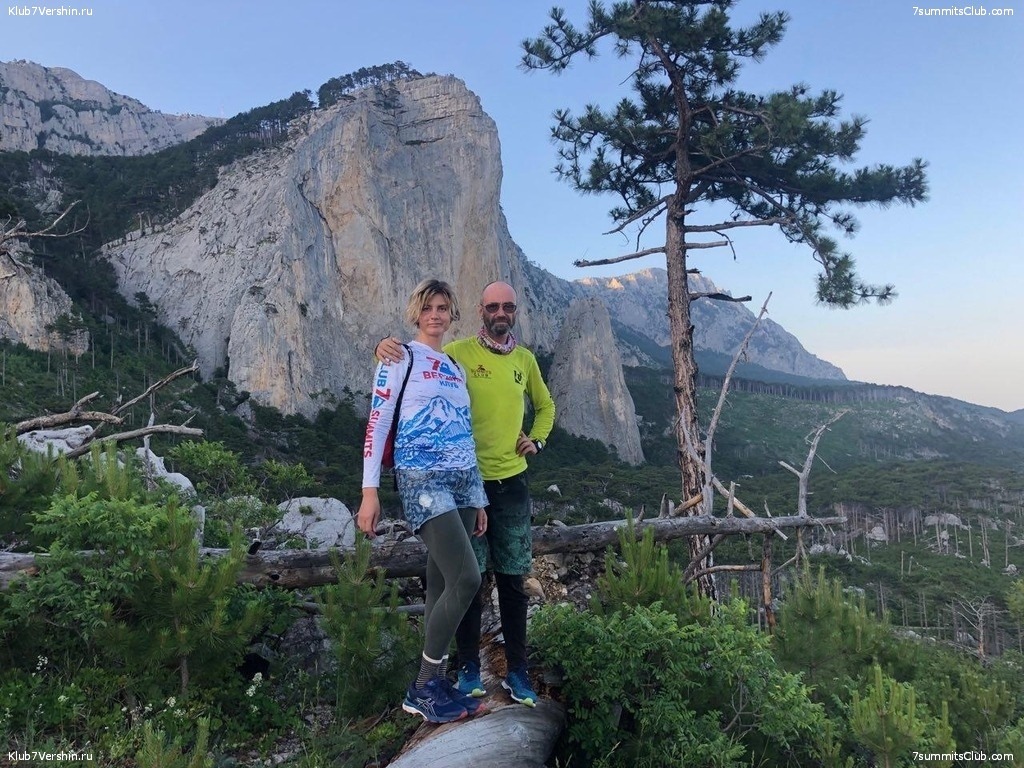 Shaan-Kaya is a rock remnant or outcrop, a former part of the AI-Petri massif that broke off and slid down the slope. While still leaning. The absolute height of the top is 871 meters. The drop of the overhanging part is 235 meters. The translation is very simple – "Falcon rock", as a viewing point for the brave and strong. 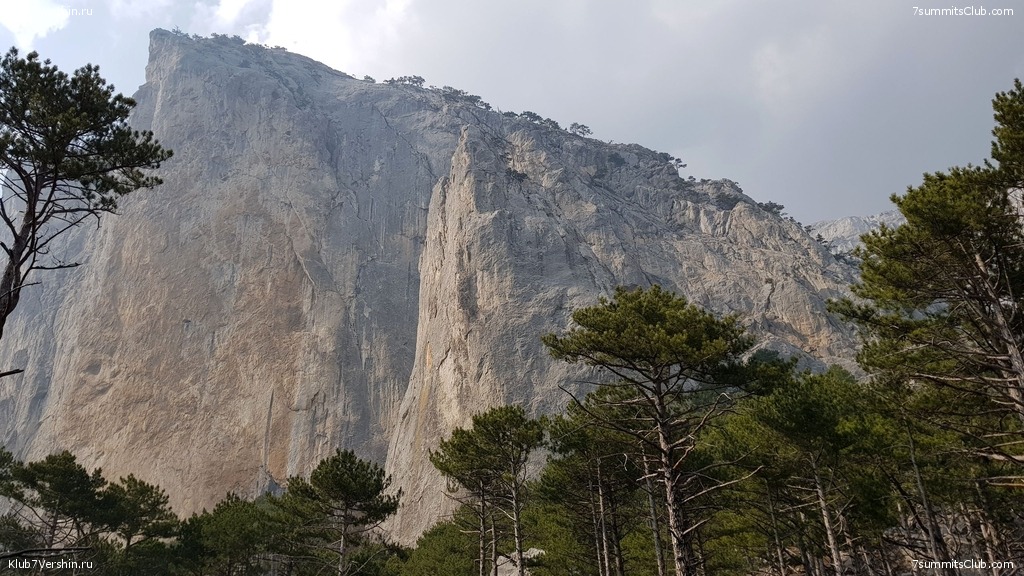 The Miskhor grottoes are an amazing natural formation on the rock wall of the AI-Petri massif (Eastern Face). In principle, it is part of the cave system of the AI-Petri karst plateau. But as a result of the collapse, the cavities usually hidden in the depth were opened up towards the southern coast of Crimea. These cave formations were first explored by the legendary pioneers of Crimean rock climbing and caving in 1960th. Since then, they have been visited for a long time only with a rope descent from above. 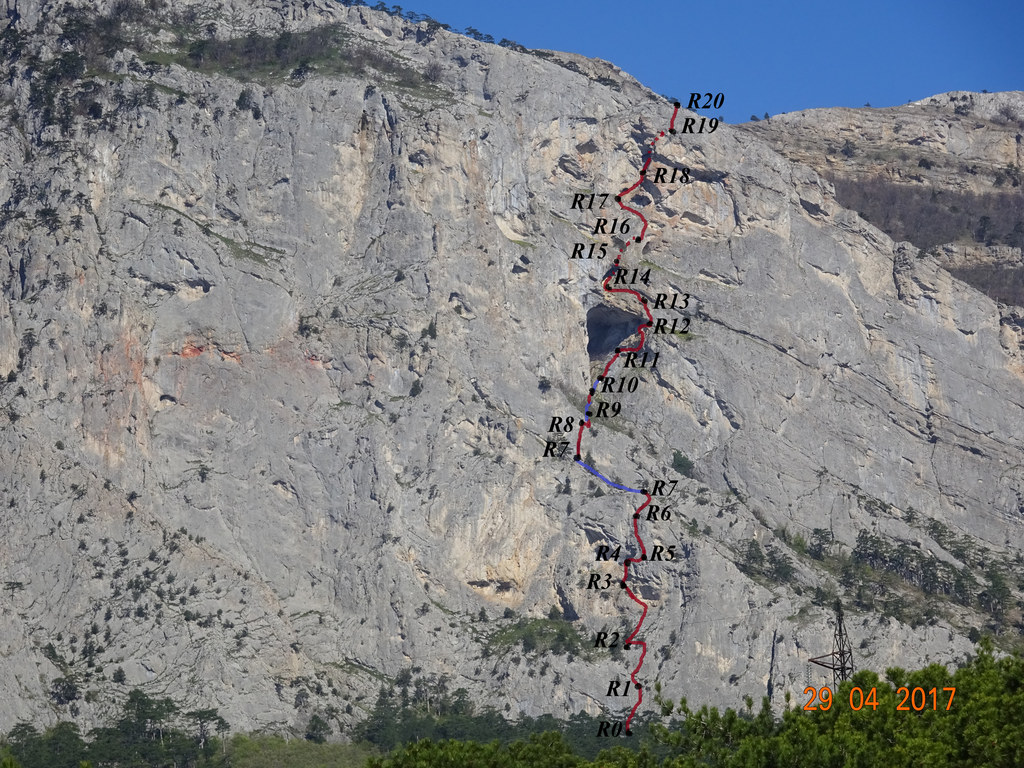 And now we have the route "Mishor grottos" from bottom to top. This was made possible thanks to the work of the team of Crimean guides of the 7 Summitss Club. Alexander Marinkevich, Kirill Gostev, Alexander Noskov, Alexander Rushkovsky and Alexey Yamkova took part in the creation of this masterpiece route.

This is the most beautiful route leads through the Eastern Face of AI-Petri. 20 pitches (from 4 to 6 climbing categories), the length of the wall is about 400 meters. Finish at 990 meters, very close to the Upper station of the AI-Petri cable car. The route is characterized by a rare variety of relief forms. There are also sections of ordinary big-wall climbing, and traverses over huge overhanging, in the caves themselves - the passage of cave chimneys. 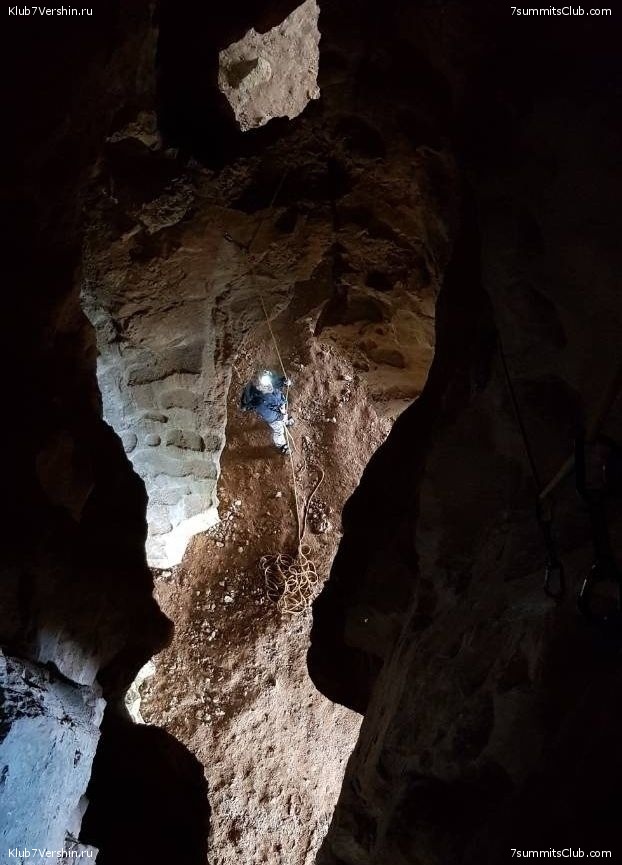 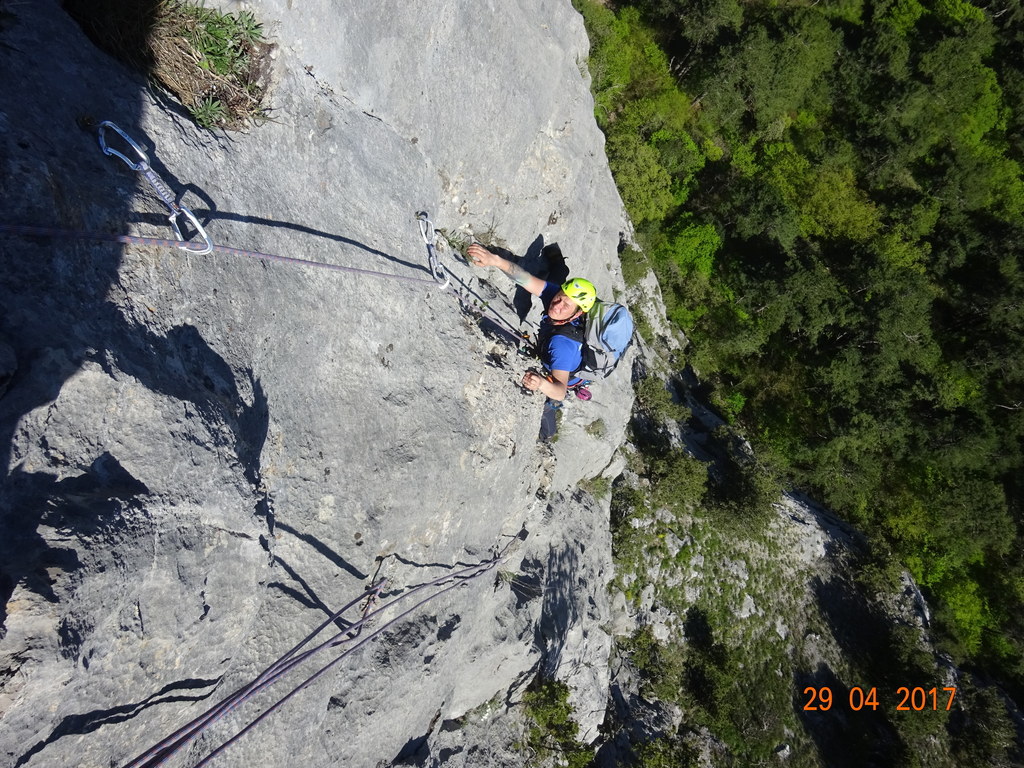