Climber who became a French national hero after making the first ascent of Annapurna. The Guardian, Friday 14 December 2012 In late 1950, Maurice Herzog lay in the American hospital at Neuilly-sur-Seine, on the outskirts ofParis, dictating ...

Climber who became a French national hero after making the first ascent of Annapurna.

In late 1950, Maurice Herzog lay in the American hospital at Neuilly-sur-Seine, on the outskirts ofParis, dictating what would become the bestselling mountaineering book of all time,Annapurna, published the following year. The effort was emotionally exacting, as he revisited every twist and agonising turn of one of the most important Himalayan expeditions in the sport's history – the first ascent of Annapurna, in central Nepal.

Annapurnawas the first mountain over 8,000m to be climbed. Others were higher – such as Everest, the site of British assaults in the 1920s and 30s – but no summits had been reached. Furthermore, the geography of theAnnapurnaregion was little known. Herzog's expedition only settled on it as an objective after first exploring the approaches to a neighbouring 8,000m giant, Dhaulagiri.

The personal cost of this triumph to Herzog, who has died aged 93, was horrific. In reaching the summit in the summer of 1950 with Louis Lachenal, Herzog's hands and feet had been frozen, and doctors had amputated all his fingers and toes. He spent months in hospital recovering from his injuries, plunged in a deep depression. Writing his book was not only cathartic but also sealed his reputation as a dynamic and courageous leader, and helped restore self-respect to postwarFrance.

When Paris Match put a picture of Herzog standing on the summit with the tricolour flying from his ice axe, it broke all previous sales records for the magazine. In January 1951, Marcel Ichac's film of the expedition opened in Paris, with the French president Vincent Auriol in the audience. A month later, another photograph of Herzog – this time gesturing with his ruined hands as he spoke to the film's audience – ran on the cover of Paris Match. "Our number one national hero," was what the magazine called Herzog – while failing to mention Lachenal at all. "Annapurna, to which we had gone empty-handed," Herzog wrote in his book, "was a treasure on which we should live for the rest of our days."

In 1958, Herzog became minister for youth and sport. After France's poor showing in the Rome Olympics in 1960, he was charged by Charles de Gaulle with re-invigorating French sport and inspiring a new generation, something he did to great effect. He was elected mayor of Chamonix in 1968, and headed several enterprises, including the company running the tunnel underMont Blanc. In a 1998 memoir, he recalled suggesting to John F Kennedy the idea of the Peace Corps and meeting the biggest names of his day, including Brigitte Bardot and Juan Perón.

In 1996, Yves Ballu published his revelatory biography of Gaston Rébuffat, one of the Annapurna climbing team, and in the same year Michel Guérin published the diaries of Lachenal, previously expurgated in a 1956 publication by Herzog's brother Gérard after Lachenal's early death, but now restored. These fresh perspectives told a more complex tale of a great enterprise whose image was controlled and exploited for political and personal interests. They cast the leader in an altogether less flattering light. Herzog protested indifference, but in private was bitterly upset.

He was born in Lyon, the eldest of eight children. His father, Robert, an alpinist himself, had served in the French Foreign Legion during the first world war. The family owned a chalet at the foot of the Bossons glacier that flows from Mont Blanc, which sparked Herzog's passion for the mountains.

He passed his baccalaureate in Paris and did a postgraduate course in business studies. Towards the end of the second world war, he fought with French partisans in the Alps, first the Armée Secrète and then the left wing Francs-Tireurs et Partisans. They made him a captain, and Herzog overlooked their affiliations. He received the Croix de Guerre and would cite the example of the resistance in celebrating the "victory" onAnnapurna.

In 1945, he went to work for the tyre manufacturer Kléber-Colombes and continued with his passion for mountaineering asFranceemerged from the horror of occupation.

Later that decade a generation of French alpinists came to the fore, including the guides Rébuffat, Lachenal and Lionel Terray. These three formed the nucleus of the team forAnnapurna, put together by the autocratic Paris-based president of the French Alpine Club, Lucien Devies. They were, however, professionals, and to maintain the amateur ideals of mountaineering, Devies appointed Herzog leader, and added Jean Couzy, an aeronautical engineer, and Marcel Schatz, a physicist. The doctor was Jacques Oudot and Ichac, already a celebrated cinematographer, would shoot the film.

Herzog's climbing record was respectable but not spectacular, and making him leader was a risk. Devies clearly had doubts about whether the guides in particular would toe the line for the greater glory of France. Two days before departing, he made them all swear an oath of allegiance to their leader.

Herzog and his team performed one of the great feats of exploratory mountaineering, trekking up the Kali Gandaki valley to examineDhaulagirifrom the east and north. The mountain was judged, in Terray's phrase, "fiendishly difficult" and so the expedition turned its attention to Annapurna, so far unseen. Just getting a view would prove surprisingly elusive.

By mid-May, the team still hadn't made progress so Herzog called a council of war at their base camp in the village of Tukucha, and with time running out before the monsoon, committed his forces to the Miristi Khola, hoping to get lucky and find a practicable route to the top. Working at extraordinary speed, and after coming to a dead end on the peak's north-west spur, the team rapidly pushed a route and a series of camps up the north face. Terray and Herzog had proved the strongest and best acclimatised, but when the supply chain stalled, Terray gave up his chance for the summit to push supplies to a high camp. Lachenal took his place at camp IV.

Wearing leather boots that offered insufficient insulation, Lachenal was anxious about his feet, not least because losing toes could threaten his livelihood. What would Herzog do, he asked, if he turned around? "My whole being revolted against the idea," he wrote in Annapurna. "I should go on by myself," he told Lachenal. "Then I'll follow you," Lachenal replied.

They reached the summit at 2 pm on 3 June, and while some historians question the validity of the summit photograph, they were close enough. Herzog was in a blithe mood – his spiritual musings were a key part of his book Annapurna's appeal – perhaps boosted by the "pep pills" Oudot had prescribed to keep them going. It was in that frame of mind that soon after they began descending he removed his gloves to open his rucksack and watched "quite stunned" as the gloves slid away down the slope. The mistake would cost him his fingers.

The descent of Annapurna was a protracted and freezing horror. Terray and Rébuffat climbed up to campIV to support them. Terray discovering a frantic Lachenal lying in the snow, desperate to get down to a lower camp so Oudot could do something to save his frozen feet. They spent the following night in a crevasse, confused and lost in a storm. Terray and Rébuffat, hunting for a route in the white-out, suffered agonising snow-blindness.

It would take six weeks for Herzog to make it home, suffering agonies in his hands, by which time his blackened feet were riddled with maggots. His serious climbing was behind him. His book, which has sold more than 11m copies, did not make him rich. The royalties went to French mountaineering, which had funded the expedition.

Herzog married Marie-Pierre de Cossé-Brissac in 1964. They had two children, Laurent and Felicité, and divorced in 1976. He had two more children, Sébastien and Mathias, with his second wife, Elisabeth Gamper, whom he married in 1976. 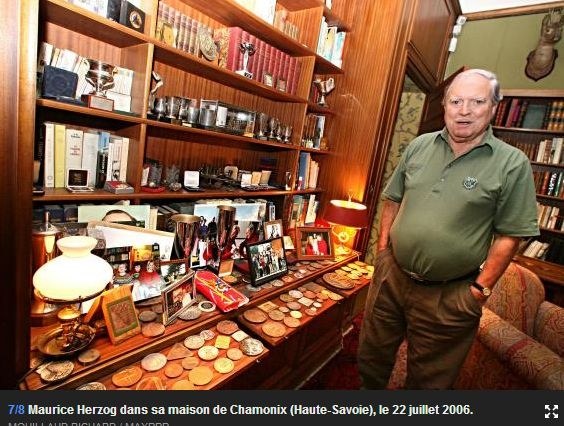