A new record on skyracing to the Elbrus was set on the festival of extreme kinds of sports "Red Fox Elbrus Race".

An athlete from Moscow Mikhail Klimov climbed the highest summit of Europe for two hours and twenty seven minutes within the main discipline of the festival that is skyracing to the Elbrus.

Andrei Puchinin has been taking part in the festival for three years; he called the day of the 10th of May "the Records Day" as 30 athletes ascended the highest top of Europe. The last year result was improved more than 16 minutes and it became the main achievement. Five participants among the leaders were able to improve Semyon Dvornichenko's result who was the winner last year (2:43).

After the finish the record-holder Mikhail Klimov, master of sports in cross-country skiing and second- class sportsman in mountaineering, said that his victory in skyrunning in Red Fox Elbrus Race was the result of the training during many months when he mounted the top of the Elbrus for nine times. «My ski training and proper acclimatization helped me much». 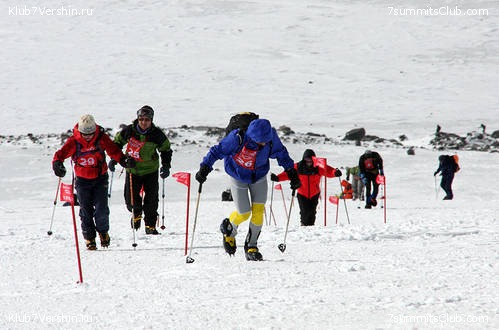 We should notice that skiers' participation and elite change became the main discovery of the festival: another skier, a sportsman from Yakutsk Dmitry Ploskonosov became the leader of the first stage of 2010 Skyrunner® World Series Trials: Vertical Kilometer®, the victory in it gave him 100 points in the world rating.

«I was surprised a little that there was such a long ascent, I had to run so much, the pace was set very high at the beginning, - Dmitry said after the finish. - I decided not to lag behind the leaders; I was following the leaders' group up to the finish. Step by step the group was lessening and only two of us left before the finish. And I won».

«Vertical Kilometer» was held in Russia for the first time. The distance with the vertical drop of 1000 meters was made from Polyana Azau till the Stance «Mir», it became the highest one in the World Series Trials. The result of forty eight minutes and one second made the Russian sportsman the winner of a man's contest; as for the women - the best was Megan Kimmel from the USA with the result of fifty nine minutes and seven seconds (10th place in the total contest).

Besides, Megan Kimmel from the USA became another discovery of the festival: she won three from four woman contests except the Vertical Kilometer, Megan was the leader in the skyrace to the Elbrus (she set a festival record among women - three hours twenty two minutes and sixteen seconds) and in the personal ski-mountaineering race, she also took the second place in the team ski-mountaineering race (in a pair with Natalya Alexandrova from Magnitogorsk). 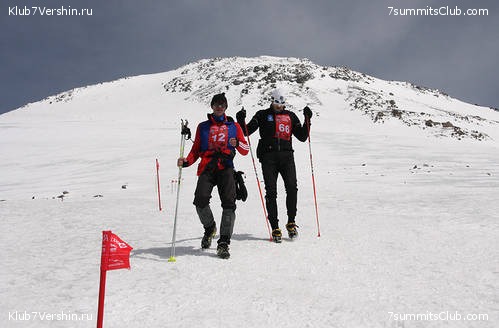 The winners of the Victory Cup in the team contest were the military men from Interior Ministry troops Ivan Rybakov (Grozny) and Sergey Matkin (Balashikha). Their team was the first on the finish. The winner of the "Victory Cup" in the personal contest was also Ivan Rybakov - "the golden ensign", he demonstrated his leadership in ski-mountaineering among the military men last year too.

The golden medals of the Cup of Russia and the Open Cup of the Elbrus Region were handed to Yuri Kurganov (Chelyabinsk) and Mingalim Sibaev (New Zealand). Among the women pairs the best proved to be the team of Elena Kirievskaya (Magnitogorsk) and Karina Mezova (Nalchik).

The eventful programme of the festival finished with the four-kilometer race on snowshoes with the vertical drop of 500 meters. The whole team of the festival: participants, judges, organizers, members of the press took part in it. The distance ran from "Krugozor" till "Mir", the total length being four kilometers. Andrei Fedorov from St.-Petersburg and the athlete of the Red Fox Asia Team Ksenia Maeva from Almaty were among the leaders in the man and woman contests; Andrei had won mountain race for mountaineers "The March Hare" and he was awarded a free trip to the festival from the Company Red Fox.

The participation of the athletes from St.- Petersburg club for the people with the limited possibilities "Mashtab Plus" was initiated by the organizers of the festival - the company Red Fox and the Russian Mountaineering Federation. Six sportsmen with poor eyesight took part in the Elbrus Race and successfully achieved the summit. Each of them was awarded an official sign "The Russian Mountaineer".

The director of the Company Red Fox and the participant of the festival Vladislav Moroz (the ascent time to the Elbrus was five hours and four minutes) draw the main conclusion: "The leaders' record time, the number of athletes, including foreigners (this year sportsmen from Russia, Kazakhstan, Kyrgyzstan, Ukraine, Georgia, USA, Lithuania, Greece, New Zealand took part in the festival) and safety of this event demonstrate real growth of both sports skills of participants and organization level of the event. I must also notice the contribution made by the Government of Kabardino-Balkaria, the Elbrus Search and Rescue team of Emergency Ministry, the head of the company "The Elbrus Cable Cars", and the head of the National Park "The Elbrus Region". I am really proud of the team who has been organizing such a great sports holiday. I hope that after Vertical Kilometer is included into the schedule of World Series Trials the number of participants from Russia and abroad will increase next year."