Dan Mallory has one last mountain to climb

The local insurance broker has climbed the highest peak of just about every continent with family members. Two years ago, the Mallory family made headlines as the first family to reach the summit of Mount Everest. "The goal that was set 10 ...

The local insurance broker has climbed the highest peak of just about every continent with family members. Two years ago, the Mallory family made headlines as the first family to reach the summit of Mount Everest. "The goal that was set 10 years ago, was that I climb the highest mountain of every continent with at least one member of my immediate family," said Mallory, who lives in Utopia. The last mountain could well be the most challenging. But Mallory, 59, won't be going at it alone. He'll be joined by Laura, 23, and Adam, 28.

Second son, Alan, 25, won't be involved in this climb, but he'll be close by.

Newly married, the mechanical engineer took a job in Santiago, Chile. There could well be a family reunion when the climbing trio stops there en route to Antarctica's Mount Vinson.

Dan's wife, Barbara, won't be climbing, but she is making her own arrangements to support the climbing family, likely from a base in Chile.

The climbers are leaving Barrie Dec. 11 and hope to summit Mount Vinson sometime around Christmas.

For Laura, it's a trip of a lifetime that she agreed to go on only last week.

"I almost missed this opportunity," she said incredulously. "I was considering not going because of a job. I should have said yes right away, without thinking about it. It can change your life forever."

It all worked out in the end. She was offered to fill a maternity leave in February, a month or so after the family's return from the climb.

Antarctica is considered the bottom of the world circling the South Pole. It is almost entirely covered by ice, has no government and no permanent population, although it is something of a magnet for researchers, attracting up to 5,000 people to research stations scattered across the continent.

While Mount Vinson isn't considered the toughest of the highest peaks to climb, it is perhaps the least accessible.

"This one has a number of unique challenges," begins Mallory.

Because it is so remote, it will cost the Barrie-area family just about as much to get to as Everest did. The cost of the Everest climb for each Mallory family member was between $40,000 to $45,000, substantially less than the average $75,000 to $100,000 most people shell out to reach the top of the world.

From there they will board a Russian propeller plane and land on a blue ice runway at the Patriot Hills encampment, run by an expedition support and touring company. It is a seasonal camp populated by tents during that continent's summer, from November to January.

From there, they board a smaller plane for a one-hour, 15- minute flight to Mount Vinson where they will begin their climb of the 16,200-foot mountain.

Oxygen isn't necessary for the climb, but there are challenges related to the air. The lower barometric pressure so close to the South Pole means the air is less dense and could feel like a mountain more than 5,000 feet taller than it actually is.

The Mallorys are preparing for the possible physiological impacts. While they each suffered from altitude sickness to some degree at Everest, none advanced to pulmonary or cerebral edema, so they're hoping their bodies will adjust on Mount Vinson as well.

The biggest challenge could well be the wind.

"I'm suspecting the winds are going to be the most unique thing we're going to be dealing with," said the senior Mallory. "But we might be lucky.

"I'm hoping for a clear day, without any wind and we'll get a magnificent view of the Ellsworth Mountains."

Just the same, the Mallorys expect their experience at Everest to serve them well.

Certainly much of the gear and clothing they gathered for the Himalayan climb will, once again, be useful.

"I think we could probably live in a freezer with the gear we've got," he laughs.

The advantage is the 24 hours of sunlight.

Just the same, the weather has got to be optimal for the actual day of the climb.

Typically, the Mallorys don't use guides.

This approach served them well at Everest -- there is no better group on which to rely than family members who you trust, know and understand. Unlike solo climbers, who each have individual goals, the Mallorys know they can rely, implicitly, upon each member of their own group. No one Mallory triumphs over another.

The Mallorys have found reliance upon their own judgement to serve them well. But to get to the mountain at the bottom of the world the Mallorys have to use an outfitter and are obliged to take a guide. They will be joined by a climber from Japan. While climbing the Seven Summits was the original goal of the senior Mallory, the plan to include family members in all the climbs leaves the door open for the three children to follow in their dad's footsteps. Afterall, they've all conquered Everest.

"It's actually a feasible goal for me," said Laura, who will have four of the summits under her belt by the end of the year. "I just need someone to climb with for the others."

"I have to be the luckiest dad in the world to have all my family members interested in doing the activities I love so much," said Dan Mallory.

"We can illustrate to others that you can have this relationship with your kids and your family."

At the beginning of this year, 275 people had climbed the seven summits - the highest mountains on the seven continents. By the beginning of next, Dan Mallory expects to add his name to that list. His accomplishments will include: 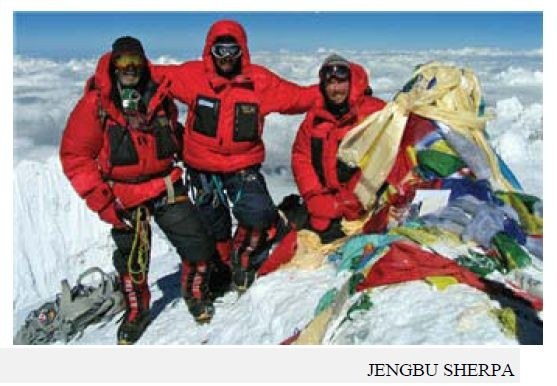