A 17-year-old boy from Utah has reportedly become the youngest person to climb the highest mountains on each of the seven continents, after reaching the peak of Antarctica's Mount Vinson on Tuesday. Johnny Collinson began his quest ...

A 17-year-old boy from Utah has reportedly become the youngest person to climb the highest mountains on each of the seven continents, after reaching the peak of Antarctica's Mount Vinson on Tuesday.

Johnny Collinson began his quest on Jan. 19, 2009, on the summit of Argentina's Aconcagua, completing the feat on the same day just one year later.

Known to the climbing world as the Seven Summits, the group of mountains include Alaska's Denali, Elbrus in Russia, Kilimanjaro in Tanzania, Indonesia's Carstensz Pyramid, and Mount Everest.

According to his Website, Collinson's father is a member of the Ski Patrol at the Snowbird Ski Resort in Cottonwood Canyon, Utah, and taught Johnny how to ski at age 2. Two years later the young Collinson climbed Washington's Mount Rainier, the highest peak in the contiguous United States.

Fewer than 250 people have conquered the Seven Summits since mountaineer Richard Bass started the challenge in 1985, but like many things in the world of climbing, it is not without its share of controversy.

Bass' list of the Seven Summits included Australia's Mount Kosciuszko in lieu of Carstensz Pyramid, which he considered to be in Asia. A year later a rival climber Reinhold Messner argued that Australia and Indonesia are actually both part of a larger continent called Oceana, and that the Indonesian peak, at 16,024 feet more than twice as high as Kosciuszko, is the true highest summit in the region.

By the measure of the Bass list it was a resident of Malibu, California named Johnny Strange who is the youngest to climb the Seven Summits, reaching the top of Everest in May of 2009 at age 17, at the same time that Collinson was on the mountain. Strange climbed Mount Vinson when he was 12 years old.

No word if either of the young men plan to go after those eighth peaks for good measure, but they'd better watch their backs. According to travel website Gadling.com, a 13-year old boy named Jordan Romero has climbed five of the summits and is planning to take on Everest and Vinson this year. 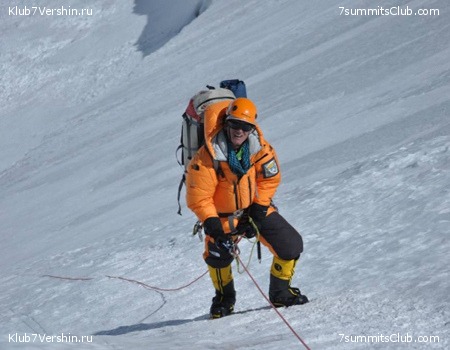