“Fire Ring of the Earth” superexpedition started on 19 February 2011

The scientific and sports expedition “Fire Ring of the Earth”, organised by the Russian Geographical Society and dedicated to the 65th anniversary of the Society’s Krasnodar Division, will be launched on February 15, 2011. ...

The scientific and sports expedition “Fire Ring of the Earth”, organised by the Russian Geographical Society and dedicated to the 65th anniversary of the Society’s Krasnodar Division, will be launched on February 15, 2011. This large-scale expedition will last 900 days, which is about 3 years. The route, covering more than 70,000 kilometres along the Pacific Ring of Fire, will take five expedition members across 19 countries.

Over the course of the expedition, the main team will be joined by auxiliary teams of scientists, who will monitor the behaviour of active volcanoes and explore locations with less intensive or diminishing volcanic activity. Hot springs, geysers, gas- emitting vents and cracks can be found in abundance in such places, indicating continuous underground activity.

Interview with Konstantin Merzhoev, leader of the expedition “Fire Ring of the Earth”

In the run-up to the launch of the scientific and sports expedition “Fire Ring of the Earth”, the Russian Geographical Society spoke to its leader, Konstantin Merzhoev.

When not involved in any expedition, Konstantin Merzhoev works as head of the Health Resorts Division of the Krasnodar Region’s Department for Integrated Development of Health Resorts and Tourism. He is keen on reviving a tradition of hiking and active tourism in the region. “Many people see the Krasnodar region only as a popular destination for beach-related tourism. I believe it’s time we broke this stereotype. Our region has a lot to offer – horseback riding in the mountains, river rafting, horseback and bicycle hikes,” says Mr Merzhoev.

Currently, Konstantin Merzhoev is getting ready for the expedition “Fire Ring of the Earth”. The interview below gives interesting insight into this 900-day long expedition along the Pacific Ring of Fire.

Q: Good afternoon, Konstantin. You are about to embark on a large-scale expedition - “Fire Ring of the Earth”. The expedition will last 900 days, which is about three years of uninterrupted passage along the Pacific Ring of Fire. Have there been any similar expeditions before?

Q: The name of the expedition speaks for itself. But how did you get the idea to explore volcanoes and seismically active zones?

A: I came up with this idea quite a long time ago. I’m a geographer by training- more precisely a geomorphologist- therefore I’m extremely interested in all processes happening on the planet. Volcanoes and volcanic eruptions have always fascinated not only specialists, but also ordinary people. Recently, volcanic activity on the planet has intensified, and this fact is more than intriguing.

Q: Are you planning to climb any volcanoes?

A: Yes, we will climb some of the highest volcanoes of the countries and continents that comprise the Pacific Ring of Fire. In all, around 70 volcanoes – both active and extinct.

Q: Do you have any other goals apart from this?

A: We intend to carry out medico-biological research, make meteorological observations all along the route, collect data on volcanic activity, conduct ethnographic observations, take photographs of volcanoes, and shoot a documentary.

Q: Speaking of the documentary, will it be dedicated to the Pacific Ring of Fire as the zone of major seismic activity, or rather to the expedition and its members?

A: We hope that we will shoot enough material not to have to confine ourselves to one particular theme for the film.

Q: How will the expedition help promote geographical knowledge?

A: All results of the expedition will be disseminated through lectures and seminars to geography students, as well as through reports at meetings of the Russian Geographical Society’s Academic Council. We have agreed with the Russian Geographical Society that teams of other scientists, travellers and reporters will join the expedition at some points along the route. We also plan to cooperate with international organisations engaged in promoting geographical science.

Q: Nowadays, you have to offer high-quality photographs if you want to attract the mass media. Will you have photographers on your team?

A: Certainly. In addition, at some points along the route our main expedition team will be joined by auxiliary teams, who will have professional photographers among them.

Q: The main expedition team has already been put together. Will the team remain unchanged till the end or will there be reshuffles depending on location?

A: We plan for the main team to remain unchanged for all 900 days. But as experience shows, things may change. And as I’ve already mentioned, there will be auxiliary teams, which will join the expedition at different points along the route.

Q: How does your family like the idea of your being away for such a long time? It must be difficult both for them and you.

A: Everybody asks this question. I can’t give you a definite answer. I’ve gone on expeditions for 20 years already, and my family is sort of used to that now. Moreover, my children participate in my expeditions from time to time, and the “Fire Ring of the Earth” will not be an exception.

Q: Covering 70,000 klometres is no small feat. What means of transport are you planning to use?

A: We will travel by various motor vehicles, by bicycle, on skis, on a catamaran-type yacht, and of course on foot.

Q: You are going to sail across the Drake Strait, which is not the easiest place to sail across. I have been there in calm weather and I can tell you that was really hard. How are you going to cross the strait?

A: We’ll do nothing extraordinary. We’ll just cross it on a steamship.

Q: Which part of the route do you think will be the most challenging physically and which one psychologically?

A: I think it will be Antarctica and the countries we will visit further, as by this time we will definitely have become tired both physically and psychologically.

Q: How are you preparing for the expedition?

A: We train a lot, we walk into the mountains and we make regular ascents of mounts Elbrus and Kazbek.

Q: What will be the first and the last location on the expedition route?

A: The expedition will set off from Cape Prince of Wales in Alaska and end in the city of Petropavlovsk-Kamchatsky in Russia.

Q: Do you usually keep travel notes during your expeditions? I’m sure your adventures and impressions will be of interest to a great many people. Are you going to publish your travel notes on the Internet?

A: Yes, we are going to make our travel notes available on the Internet, and we will update them regularly, hopefully every day. So web-users will be able to follow up on our news.

Q: And the last question. What does travelling mean to you?

A: Travelling means everything!

Konstantin spoke to Yaroslav Nikitin of the Russian Geographical Society

Other members of the team (prepared by Tatiana Nefedova)

Aleksey Kazachenko, 26, works as a chef in a Krasnodar restaurant. In 2008, he won the title of the greatest chef in Russia’s Southern Federal District. “I walk into the mountains four times a year,” says Aleksey. “I’ve been to the Tien Shan, Pamyr, Caucasus, and Mount Elbrus. Expeditions are an important part of my life. That’s why when I heard about the “Fire Ring of the Earth” expedition, I asked Konstantin Merzhoev to include me on the team.”

Andrey Kolodkin, 26, graduated from a medical college as a male nurse. For six years he worked as part of a first aid unit. Currently Andrey is a 4th-year student at a medical university. “I’ve always been fascinated by volcanoes,” says Andrey. “So I simply couldn’t miss the opportunity to visit the most famous volcanoes of the planet. My family understand and support me. The most difficult thing was to get a gap year at the university…”

Nikolay Kovalenko, 26, a teacher and psychologist, heads a Krasnodar-based sports and tourist club “Azimuth”. “I’ve jumped at this opportunity, just as other members of the expedition have,” says Nikolay, who will be a timekeeper during the expedition. “My mother took the news quite calmly, though I think she can’t get over the fact that I will be away for two and a half years.”

Ilya Semyonov, 25, works as a long-haul truck driver and a tourism instructor. “I’ve been keen on travelling since my childhood, and have always taken part in various hiking, camping and backpacking trips,” says Ilya, who is responsible for expedition gear. “When I announced that I was going to participate in the “Fire Ring of the Earth” expedition, my family was not at all surprised. I’m not worried about losing touch with the real world, for it’s unlikely that any considerable changes will take place in the world over just two and a half years.”

Kamil Ziganshin, who is in his seventies, works as a writer and reporter. “I’m embarking on this unique expedition to prove that being in your seventies is not the end for a man, it’s just the beginning! I’m looking forward to going through a real male bonding experience, and getting closer to God, by climbing the tallest mountains on the planet. ” 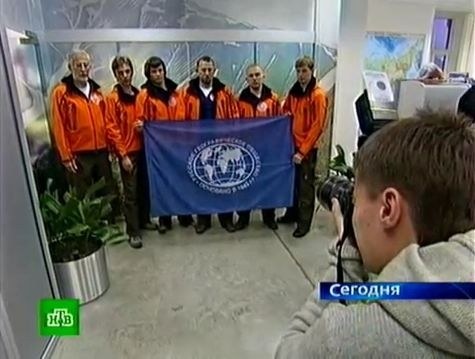