The Snows of Kilimanjaro by NASA…. The views from the top of Mount Kilimanjaro—a 5,895-meter (19,341-foot) dormant stratovolcano inTanzania—are as surreal as they are spectacular. After ascending through multiple ...

The Snows of Kilimanjaro by NASA….

The views from the top of Mount Kilimanjaro—a 5,895-meter (19,341-foot) dormant stratovolcano inTanzania—are as surreal as they are spectacular. After ascending through multiple ecosystems—including cropland, lush rainforest, alpine desert, and a virtual dead zone near the summit—climbers can find themselves peering down on a thick blanket of clouds below that seems to stretch endlessly in the distance.

But in the immediate foreground, ice dominates the view. Looking north, a shelf-like block of ice with a sharp vertical cliff sits on an otherwise featureless, sand-covered plateau. In the other direction, a second ice field spills off the edge of the plateau, down the mountain’s southern face.

Kimberly Casey, a glaciologist based at NASA’sGoddardSpaceFlightCenter, was savoring the views from Kilimanjaro’s summit and caldera when she snapped these panoramic images of Kilimanjaro’s northern (middle) and southern (bottom) ice fields. The Advanced Land Imager on NASA’s Earth Observing-1 satellite acquired the top image, which shows some of the same ice fields from above on October 26, 2012. 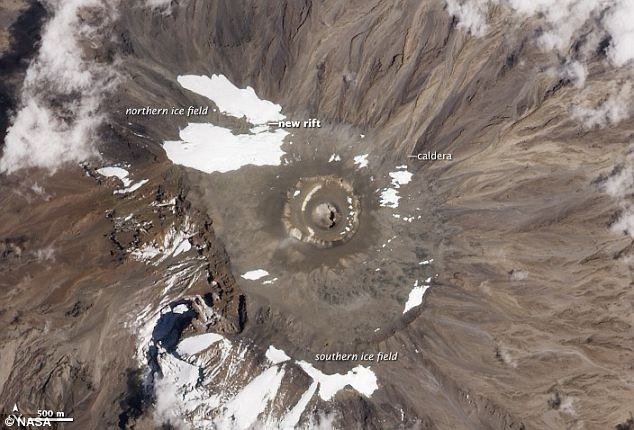 Casey was taking part in a September 2012 research expedition to Kilimanjaro to study the ice at the summit. For scale, bright tents that were part of the scientists' base camp are visible in the lower left of the northern ice field image.

Despite Mount Kilimanjaro’s location in the tropics, the dry and cold air at the top of the mountain has sustained large quantities of ice for more than 10,000 years. At points, ice has completely surrounded the crater. Studies of ice core samples show that Kilimanjaro’s ice has persisted through multiple warm spells, droughts, and periods of abrupt climate change.

But trends beginning more than a century ago suggest Kilimanjaro’s peaks may soon be ice-free. Between 1912 and 2011, the mass of ice on the summit decreased by more than 85 percent. Researchers say it’s no longer a question of whether the ice will disappear but when. Estimates vary, but several scientists predict it will be gone by 2060.

Rising air temperatures due to global warming could be contributing to the ice loss, but a number of other factors are just as important, if not more so. An increasingly dry regional atmosphere, for example, is starving the mountain of the fresh snow needed to sustain the ice fields. Drier air is also reducing cloud cover and allowing more solar energy to warm the ice surfaces.

Casey and colleagues noticed yet another ominous sign during their 2012 expedition. The northern ice field, which had been developing a hole since the 1970s, has separated. “This was the first year that the northern ice field completely divided into two,” said Casey.

“We were able to walk on land—or we could have even ridden a bicycle—directly through the rift.”

Saint Louisresident Jerry Frost was recently one of the first people in the world to run a complete circuit around the tallest freestanding mountain in the world: Mount Kilimanjaro. Frost, an ultra marathoner in his fifties, spent eight days running around the base of Mount Kilimanjaroas part of the first annual Stage Run around the Roof of Africa, a run hosted by the Tanzanian adventure outfitter Summit Expeditions & Nomadic Experience (SENE). Frost was one of ten international ultra runners to participate in this groundbreaking running event October 18-28. Other participants includedBoulderColorado’s Krissy Moehl, one of the most highly regarded female ultra marathoners in the world, and Simon Mtuy, Guinness world record holder for fastest unassisted ascent and descent ofMount Kilimanjaro. The runners were accompanied by videographer Andrew King ofSouth Africa’s D4 Productions, who is creating a short video series of the event that will be available later this year.

Frost and the other SENE Stage Run participants ran 170 miles and endured a total ascent of more than 35,000 feet as they ran around the steep slopes of Mount Kilimanjaro. The terrain was intense and varied as the group ran through rainforests, dry plains, coffee plantations, villages, and deep valleys on the ancient footpaths of the indigenous Chagga people. The run was fully supported and the participants enjoyed chef-prepared breakfasts and dinners at camp and snacks and beverages on the trail. The runners got a taste of local culture when they camped at local villages in the evenings. They also supported reforestation efforts by planting trees in thevillage of Marangu. On the fourth night, the runners were lucky enough to enjoy hot showers and comfortable accommodations at Simba Farm inWest Kilimanjaro.

The ultra runners did not encounter any major injuries or set-backs over the course of the run, and all runners completed the circuit within the time allotted. On their last night, the runners enjoyed a celebratory evening at Simon Mtuy’s private Mbahe Farm before parting ways and moving on to their next big adventures. 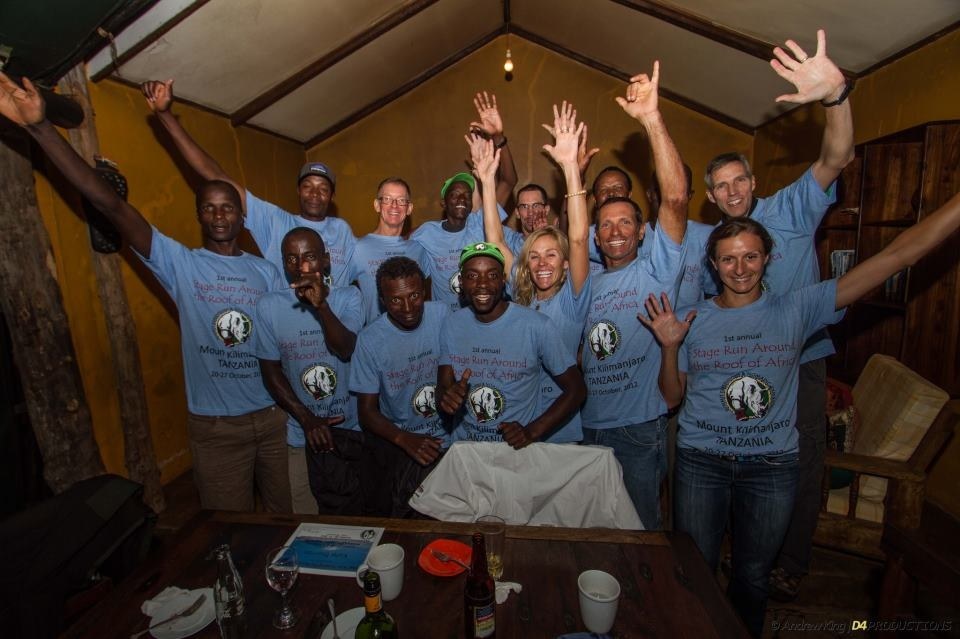 KATHMANDU: Two years after scaling the highest mountains in Australia and Russia, the all-women Nepali mountaineer team is all set to climb Mt Kilimanjaro (5,895m), the tallest peak of Africa, with the theme ‘A journey to educate young girls’ from March 1-7 next year.

In a mission to climb the tallest mountains in all seven continents, this will be their fourth expedition.

Less than 300 people in the world have climbed the seven summits, of them only 51 are women where only two Nepali men have achieved this feat so far.

Shailee Basnet, team coordinator, said they would be highlighting the importance of ‘girl education’ during Mt Kilimanjaro climb ‘Kili for a cause’.

The team has been promoting girls’ education in coordination with various government and non-government organisations since their first expedition. “We have already reached out to 11,000 students in more than 100 schools across the country to promote education for girls,” she said.

girl education around the world.

One of the climbers is a dynamic youth activist advocating against early marriage, the other is a teacher from the nearly extinct bushmen tribe called ‘the Hadzabes’ and the third climber is Hlubi Mboya (on the picture), a popular television actress in Southern Africa who is also the World Food Programme Ambassador against Hunger in South Africa.

According to Basnet, Nepali and Tanzanian climbers will be visiting various schools in Arusha andDares-Salaam,Tanzaniato tell their stories and encourage young students about the importance of education and to achieve their dreams.

The total budget for the Kilimanjaro climb is $50,000 in which 50 per cent will go to charity.

Childreach International is setting up online global donation campaign for the event.

The United Nations World Food Programme (UNWFP) is sponsoring the climb for three African Women. They will also produce a documentary movie featuring the climb.

The all-women Nepali mountaineer team on the slopes of Elbrus 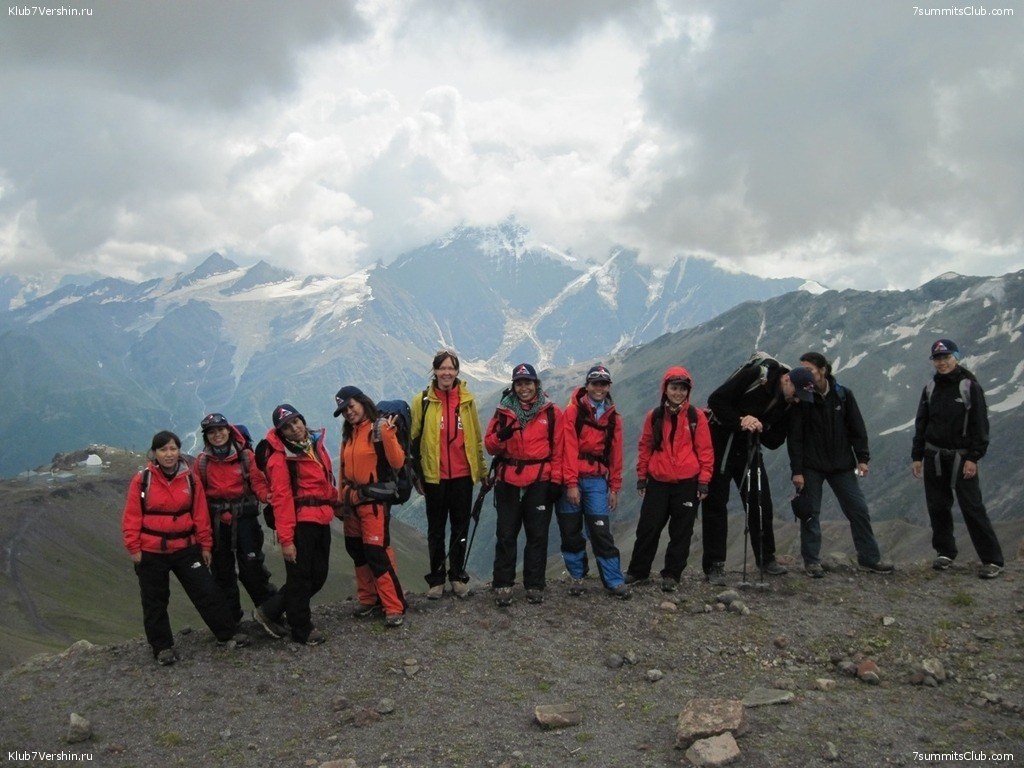 25 new peaks to be open for climbing

The government is planning to open new peaks that are in demand for the promotion of mountain tourism and to create new destinations.

The government had, in 2003, opened 111 new peaks, and later nine other peaks in 2004, but since then no new peaks have been opened. Currently, 326 peaks are allowed for mountain expeditions and adventure sports.

“We will soon forward our study report of the peaks that can be opened for expeditions like other regular peaks,” said under secretary at the Tourism Industry Division Surendra Sapkota. The division is currently studying applications from various regions that have requested the government to open certain summits for expeditions.

“We have a list of applications requesting us to open restricted peaks to create fresh destinations for tourists who arrive inNepalfor mountain and adventure tourism,” said Sapkota. “We are going through the documents and studying peaks that can be allowed for expeditions, and we are also taking suggestions from other related associations on the matter,” he said.

“As soon as we prepare proper documents, we will forward them to the Ministry of Culture, Tourism and Civil Aviation, which after further verification will submit the report to the cabinet for final approval,” he said, adding that there is a demand for new peaks and along with the permission to open the peaks, it will definitely attract quality number of mountaineers and create new destinations.

“It has been more than eight years since the government last announced new peaks for expeditions, therefore, it is time that the government open new border-peaks for mountaineering,” said former president of Nepal Mountaineering Association Ang Tshering Sherpa.

“We have also recommended 25 peaks, most of which are border-peaks that can attract quality number of climbers,”

said Sherpa, adding government must simplify rules and develop a one-window system so that the process is completed on time.

“It has been two years since we recommended names of border-peaks that are in demand among mountaineers,” he said. 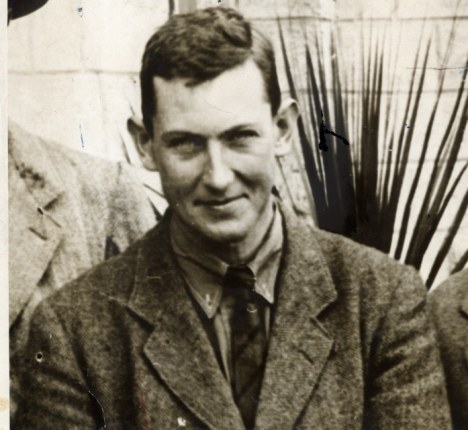 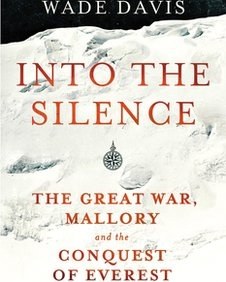 Wade Davis's book Into the Silence: The Great War, Mallory and the Conquest of Everest will receive the £20,000 prize.

Judges said the "momentous" book, the result of 10 years' research and writing, "shed new light on events and stories we thought we already knew". 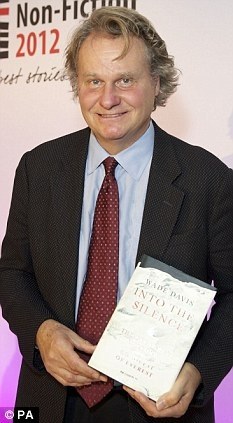 The adventurer gives a detailed insight into the explorers' world, focusing on Mallory's expeditions and the impact of the Great War.

Chair of the judges, David Willetts MP, said it was a "fascinating historical narrative of a great adventure".

"It's an exciting story of human endeavour imbued with deep historical significance," he continued.

"Wade's scrupulous use of sources and attention to detail, combined with his storytelling skills and ability to enter into the minds of the people he is writing about, make this a thoroughly enlightening and enjoyable book."

Canadian Wade has written 15 books and produced the Geographic Channel's documentary series Light at the Edge of the World.

He flew into London from New Yorkfor the announcement of the prize at the Royal Institute of British Architects.

Waded received his PhD in ethnobotany from Harvard University

Willetts said that this year's shortlist was "very strong", which made Wade's win "all the more significant".

The rest of the judging panel was made up by writer and biographer Patrick French, The Guardian's non-fiction books editor Paul Laity, editor of Prospect magazine Bronwen Maddox, and philosopher, poet, physician and cultural critic Professor Raymond Tallis.

The prize is open to all non-fiction books published in English, by writers of any nationality, in the areas of current affairs, history, politics, science, sport, travel, biography, autobiography and the arts.

Previous winners include 1599: A Year in the Life of William Shakespeare by James Shapiro and The Suspicions of Mr Whicher by Kate Summerscale. 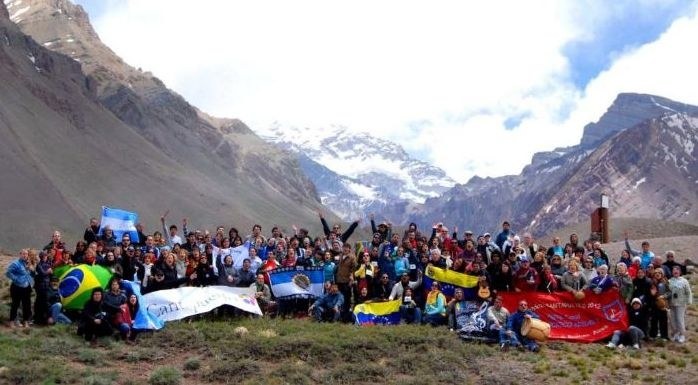 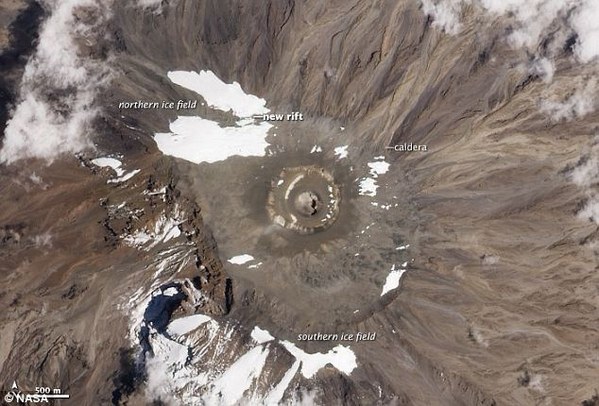 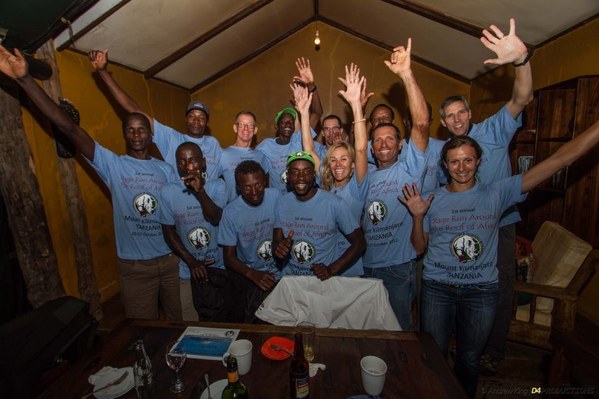 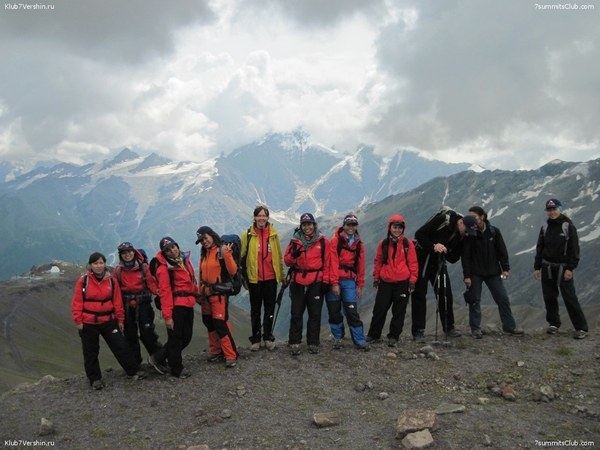