Zermatt.ch. The Zermatt Civic Community is planning to invest several million francs in the renovation and extension of the existing mountain huts on the Matterhorn. The modernized accommodation is to be opened in 2015 to coincide with the ...

Zermatt.ch. The Zermatt Civic Community is planning to invest several million francs in the renovation and extension of the existing mountain huts on the Matterhorn. The modernized accommodation is to be opened in 2015 to coincide with the 150th anniversary of the first ascent of the Matterhorn. It is intended to upgrade the Hornli Hut with space to sleep 120 and a daytime restaurant to meet increased guest requirements and the latest standards of technology.

The current accommodation options on the Matterhorn at 3260 m.a.s.l. consist of two buildings: the Berghaus Matterhorn (Belvedere), from the turn of the 19th century, which is owned by the Zermatt Civic Community, and the Hornli Hut, which was built in 1965 by the Monte Rosa section of the SAC on a leasehold plot belonging to the people of Zermatt. The two buildings are not linked and both are in urgent need of renovation. By 2015, the two buildings are to become one unit that will meet today’s requirements in terms of gastronomy, functionality, energy, sanitary facilities, water supply and wastewater disposal, whereby the water shortage at the foot of the Hornligrat presents a particular challenge. Plans envisage solving this problem in a similar way to the new Monte Rosa Hut; snow would be melted in winter and stored in a tank under today’s SAC hut.

Every year, an average of up to 3500 guests stay overnight on the Matterhorn. Of these, some 400 stay in the Hornli Hut and 3100 in the Berghaus Matterhorn. The narrow dormitories for up to 25 persons and simple sanitary facilities no longer meet today’s requirements. On summer days, up to 140 mountaineers set out on the ascent of the Matterhorn. The Berghaus Matterhorn is also extremely popular with day guests, who have played a large part in the success of the lodge. This results in the modest infrastructure and hut team around host, Kurt Lauber, regularly reaching the limit of what is within the realms of possibility. Fernando Clemenz, Director of Mountain Operations at the Matterhorn Group sums it up: “It is of prime importance to the responsible persons in the civic community and the Matterhorn Group to offer guests suitable facilities and services at this special location, even if the focus is not on a profitable operation because of the short opening period.” 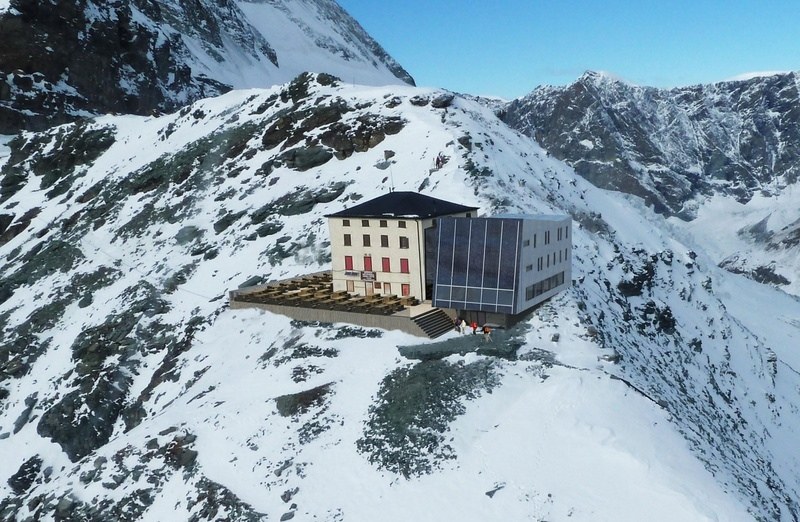 The initial position is not exactly straightforward and also somewhat out of the ordinary, even for the Matterhorn Group: the modernization of a major building complex in the high mountains requires time. Thus planning at the Matterhorn Group has been pressed ahead with for months, even while decision making is still in progress. The civic community has commissioned Zermatt architect Hans Zurniwen to draw up a pre-project for the renovation and extension of both huts on the Matterhorn. The pre-project will present and examine different versions. The preferred version is to renovate the Berghaus Matterhorn and build a modern extension to replace the Hornli Hut. Another option being considered is to replace the Bergaus Matterhorn with a completely new building or an extension to the western section of the building. Particular attention will be paid to the building services and supply concept during modernisation. Solar panels will be installed for the supply of hot water. There are no plans for an actual heating system; the major part of heating needs will be covered using passive solar radiation. The water supply will be provided via a water reservoir for meltwater, which must have a volume adequate to ensure the supply until September. Wastewater disposal will take place using the proven method of a separate sewer system (solid/liquid) with sewerage system and sewage plant disposal, whereby a small hydropower station will be operated using treated grey water. In addition, a ventilation system is planned for the kitchen and communal room and the installation of a photovoltaic system envisaged on the south facade for the supply of electricity. Initial cost estimates anticipate an investment of approximately 7 million francs for the renovation and extension of both huts.---

The responsible bodies of the Zermatt Civic Community and the Monte Rosa section of the SAC agree that for operational and economic reasons, it would make sense for the future responsibility for catering operations at the start of the Matterhorn climb to be in one pair of hands. The Zermatt Civic Community now wants to take over the entire building project and buy the Hornli Hut from the Swiss Alpine Club. Preparatory building work can commence in 2012, as soon as the decision is made on the version chosen for the extension and renovation. A possible new-build section would be realized in 2013 and 2014 and completion work carried out in 2015. The smooth running of normal hut operations must be ensured during the building phase, because closing the Hornli Hut would be equivalent to closing the Matterhorn. Environmental associations are included in the key planning phase as well as the SAC and regular discussions are held. All agree that a modern operation will welcome guests in 2015, at the 150th anniversary of the first ascent of the Matterhorn.Thrills at Switzerland’s most famous SAC hut 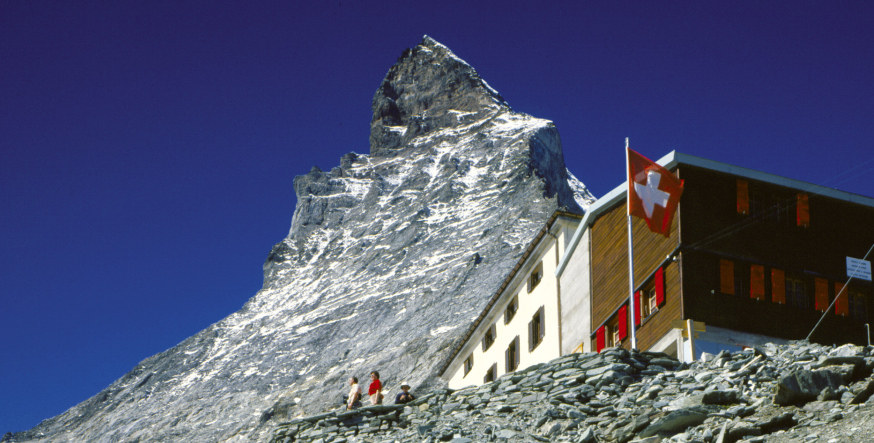 “You never walk alone” – appropriate words published on the Internet by a hiking blogger from England. Anyone hiking from the Schwarzsee lake towards the Hornli Hut is truly never alone, because an increasing number of mountain hikers are now making the ascent as well as climbers. Some people sit equipped with binoculars on the terrace of the Hornli Hut like avid fans. From their ringside seat they watch every step - or false step - of the Matterhorn gladiators and comment on the events.

Hornli Hut guests, day visitors, know that a stay on the terrace is a “live” thriller, mountain panorama and perhaps documentary of a dramatic rescue rolled into one. If poorly prepared climbers are en route, watchers can be witness to a game of Alpine Russian roulette played by the summit hopefuls. Of climbers who enter the wall with poor equipment and scant preparation and then tumble down like rag dolls from the east flank. At worst, the unfortunate climbers belong to the ten per cent of victims who disappear for ever into the glacier.

But up there are also many serious mountaineers, the summit scalers, whose presence has made the Matterhorn world famous since 1865 and continues to do so today. And then there are the charismatic mountain guides, who lead their guests safely up and down the magical “Hore”, the local name for the mountain. Every summer they make their pilgrimage to the Hornli Hut and accept the stresses and strains of a restless, if not sleepless, night in a dormitory with up to 25 people. And if water is in short supply, they’ll also go without brushing their teeth. On sunny, summer days there are so many climbers on the Matterhorn that lack of space on the roped routes results in exchanges of strong language, holdups and accidental rock falls.

In its almost 150 years of mountaineering history, the Matterhorn has claimed well over 500 lives. Four deaths occurred at the start in 1865. After Englishman Edward Whimper’s seven-strong team stood in triumph on the summit, he was acclaimed the victor. However, four people fell to their deaths on the descent and Whimper faced court proceedings. Nevertheless, the Matterhorn has a magical attraction. It is the most photographed mountain in the world. It holds many mountaineers in its grip and won’t let go until they too have stood on the summit.

Information on the first ascent and the torn rope of Whimper’s team: on view in the Matterhorn Museum

Zermatt Museum: The past as an experience

The Zermatt Zermatlantis Museum will be celebrating its fifth anniversary on the 18th December 2011. Over this time, it has become an important pillar of Zermatt’s alpine history and culture, with as many as 1,000 visitors flocking to the underground world of the museum on some days.

The concept of setting up a village with original, old buildings from Zermatt as a showplace for the historical subjects has been extremely successful. For its guests, the museum has developed into an integral feature of the overall experience of Zermatt. Even the locals often come and look around.

On average, around 40,000 persons visit the museum each year. It can happen that up to 1,000 persons descend the stairs into the underground past of Zermatt on a single day. The successful concept originated from the Steiner museum concept company in Sarnen, who count the Glasi Hergiswil (glass works museum), the Harbour Museum in Hamburg and the Swiss National Museum (Landesmuseum) among their clients.

Zermatlantis is the fusion of the words Zermatt and Atlantis, and is a metaphor for the historically designed museum archipelago. Stories are told of the Horu, and of the little village with its inhabitants, who have now become globally respected tourism protagonists as a result of “first-ascent alpinism”.

“Village square” as the centre

“Now and again, we have noticed that our visitors on the Museum’s village square behave as they would have behaved on a real village square. They talk to each other, sit on the benches near the tree or even take a nap”, says Edy Schmid, the president of the Alpine Museum Zermatt Association. You reach the walk-in buildings from the cobbled village square: the mountain guide’s house, the local pastor’s home, the tiny tea house and the stables with farm animals, including mules, black-necked goats and black-nose sheep. There are also wild animals, however: marmot, chamois and an ibex that is still smelly today.

The drama of the first ascent

The visitors are mostly drawn to mountain guide’s house and to the house in which the first ascent of the Matterhorn by Edward Whymper in the year 1865 is shown. The drama of the three survivors (Whymper and father and son Taugwalder, the mountain guides) and the four men who fell (Michel Croz, a mountain guide from Chamonix, and the guests Francis Douglas, Robert Hadow and Charles Hudson) really gets under your skin. In addition to the broken rope, which is draped over a red velvet cushion, you can also see equipment and clothing remnants from the victims, as well as the portraits of the stern-looking participants. In 2007, using a replica of the original rope, it was found that, contrary to the rumours, the rope was not cut for self-survival. The investigation commissioned by the museum proved that the rope could only hold 300 kilograms, and was therefore too thin to save the lives of the four men that fell. 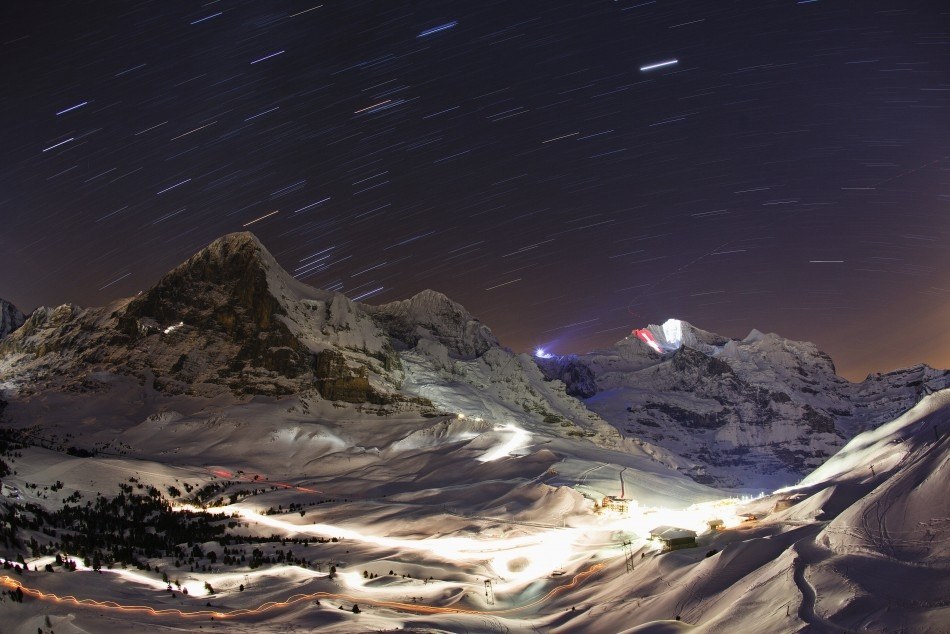 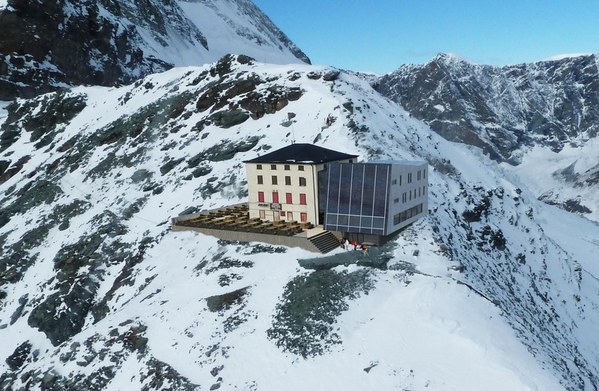 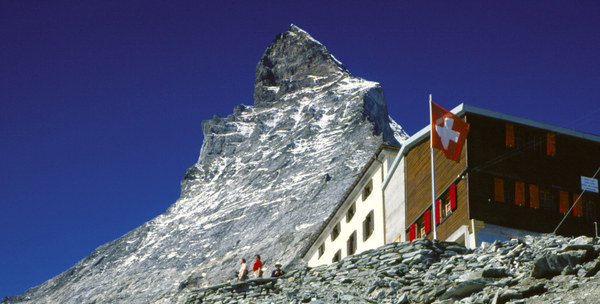