LYUDMILA KOROBESHKO: THE ELBRUS OF MY YOUTH

Elbrus. Its beaming twin peaks beckoned to me as I looked through my window as a child. Occasionally, some of my friends from school and I would hike towards the glistening giant. Sometimes we would even make it as far as the Bermamyt ...

Elbrus. Its beaming twin peaks beckoned to me as I looked through my window as a child.

Occasionally, some of my friends from school and I would hike towards the glistening giant. Sometimes we would even make it as far as the Bermamyt Plateau. At this point in my life, the thought of climbing Elbrus hadn’t even crossed my mind.

Later, I joined the mountaineering club at my university. We began to draw nearer and nearer – first to Irykchat (a glacier on the east side), then toChegetPeak(or Maliy Donguzorun, if you prefer)… Elbrus, however, remained out of reach. It was too great a challenge for us with our limited experience and our sub-par climbing equipment.

It was finally in 1996, the year I graduated, when our coach pulled a few of us aside and told us to start preparing for Elbrus. We had less than a month before our expedition, so we really had to get down to business. I would jog around Mashuk (a 10-kilometer run) three times a week. Every time the twin-peaked Elbrus came into view as I rounded the bend, I would think to myself, “I can do it. I have to. I haven’t been training this hard for nothing.” I imagined that this would be one of the major achievements of my early years. One of my friends was going to give birth. Another had found a job. I would be the one who climbed Elbrus.

On weekends, we would hike up to the highest peak in the foothills – Beshtau (1,401 m). I remember one of the last hikes before the big climb. My girlfriend and I were wearing our new shoes, which we had bought especially for Elbrus. They were leather, with a layer of Vibram. We spent just about everything we had on those shoes. The plan was to wear them in a bit so we wouldn’t get blisters on our big climb ahead. It turned out to be a good idea. What we had anticipated might have otherwise happened on Elbrus happened instead on Beshtau. Our feet were covered in blood. I had never had blisters that bad before.

The two of us were a sad sight as we headed back from Beshtau to meet up with our coach. I was limping, trying to hold back tears. Natasha forced me to keep a straight face: “Lyudmila, I know it hurts, but hang in there. You need to make it seem like everything’s fine. Smile!” It took every last ounce of my strength to force a smile.

Finally the time came. Elbrus isn’t just a climb. It’s a journey. We started out from the Ullu-Hurzuk valley and worked our way through four passes up to the Kukurtliu wall. In other words, we hiked from west of Elbrus to the north side of the mountain. On the way, we even saw a bear!

We started our attempt at the summit from the Oliiniykovskiy Hut at 3,600 m. It was around 2 o’clock at night. It was windy. Around 5 o’clock in the morning the wind started to get even worse. “It’s nothing, just a light morning breeze,” our guide told us. That quote would later became an inside joke among us, especially since the winds got even worse – it was practically a hurricane up there. Despite the worsening conditions, we knew there was no turning back. We had worked too hard. We finally made it to the western summit around 3 o’clock in the afternoon. Sure, we were slow – the climb took us more than 12 hours – but we made it. And that’s what counts.

I have had the chance to climb Elbrus a number of times since then: with friends, with clients, the eastern peak, the western peak… even the “Cross”. However, that first climb will always be the most special to me. 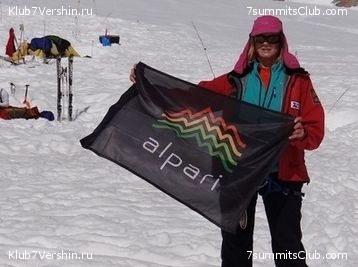