The first part of the Aconcagua season…. two death

Season opened, as usual, on November 15. The number of tourists, climbers once again increased, by 10 percent. This occurred despite a significant increase in the cost of permits. Weather was good at first, but in December spoiled. Most ...

Season opened, as usual, on November 15. The number of tourists, climbers once again increased, by 10 percent. This occurred despite a significant increase in the cost of permits. Weather was good at first, but in December spoiled. Most climbers returned home without the summit, because of the strong winds

Many climbers asked for help from rescuers during the first period of the season. Mainly these were minor incidents.

The most significant rescue was in early December. Eliana Caamano, a girl-guide, hired by the U.S. company Mountain Trip, tried to climb to the top with a disabled Afghan war, 29-year-old American, Neil Duncan

Eliana and Neil did not reached the summit because of bad weather and fatigue. On the descent they were hit by a snowstorm, gave a signal for help and stay for a night in the region of Independencia. A group of four young rescuers went to meet them. They went half night, and it was not in vain. Neil lost his sight (snow blindness), was in very poor condition. Only the use of artificial oxygen and medication has helped him gain strength for further fight for life.

The next day a large group came up for the rescue, it was about 25 people went out from the camp Plaza de Mulas. By the joint efforts they managed lowered Eliana and Neil to the Nido de Condores camp. From there, a helicopter was able to pick them up to Horcones.

At the end of the year there was a bad case with a Japanese mountain climber. At Plaza de Mulas Rangers suddenly noticed that 34-year-old Minoru Kawada does not come out of the tent third day. Opening it, they found a Japanese climber unconscious. He was urgently transported to the hospital inMendoza, but doctors do not guarantee that he can be saved. So far, he's in a coma. 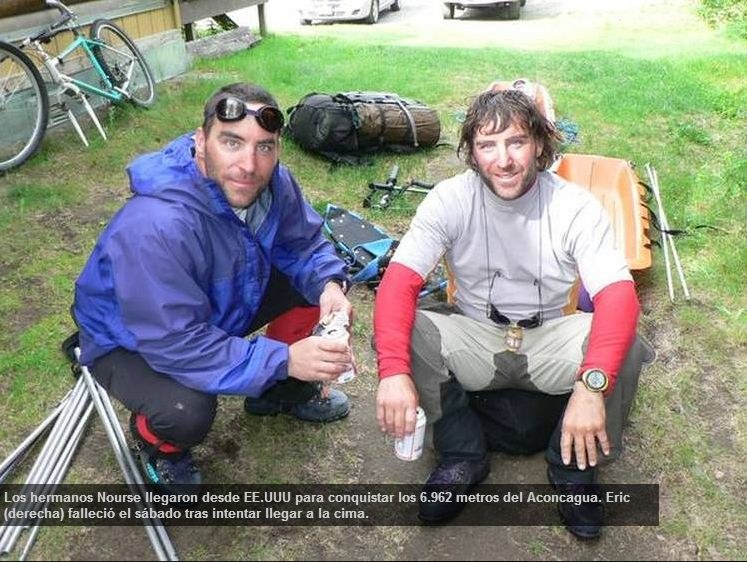 An avid climber and adventurer, Eric Nourse traveled to Alaska in 2006 to tackle Denali. (Photo courtesy of Candee Nourse)
When planning how to summit 22,841-foot Mount Aconcagua in Argentina, Greeley resident Eric Nourse, as usual, chose the riskiest route.

Greg Nourse spoke Tuesday via Reinhart's satellite phone from Mendoza, Argentina, where Eric Nourse's body was taken for an autopsy.

Reinhart met the Nourse brothers at a fraternity at Oregon State University in the late 1980s. They shared a taste for extreme adventure, and for the next 23 years they often traveled together to the Alps, Denali or the Andes in South America.

Eric Nourse, 41, had a Greeley flooring business. Whenever he could, he was in the wilderness: kayaking, rafting, scuba diving, skiing, snowboarding, fly fishing, mountain biking, hiking, hunting elk.

The twins and Reinhart would plan big trips for months. In 2004, the Nourse brothers rode motorcycles through Mexico, Guatemala and Belize for two months. They climbed Denali twice.

"He could climb a tree like a monkey. There was something that was not quite human about him," she said.

Candee Nourse said she never worried previously about her husband going into danger because he was never worried, but this time was different. It wasn't that the South American peak was a technically difficult climb.

The three friends reached the "high camp" tents at 19,200 feet in elevation on Mount Aconcagua by Thursday. They considered going on the Polish Traverse but decided to take the more challenging route up the face of the Polish Glacier.

At 4 a.m. Friday, the three embarked for the summit with Eric Nourse leading the way under a full moon.

The glacier was almost all ice with little snow for traction, and it was much steeper than they had anticipated. They had not carried enough ice screws and snow pickets along for the longer ice climbs.

"It was more taxing and time- consuming," Greg Nourse said.

They didn't reach 22,000 feet in elevation until after dark. Reinhart was suffering from altitude sickness and couldn't go any farther.

Eric Nourse said he was going to summit the mountain in the moonlight, find the less challenging trail down the mountain and get help.

Greg Nourse said his brother climbed another 600 feet and searched for the trail down.

Climber Eric Nourse sets off on his 2006 Denali climb in Alaska with gear in tow. (Photo courtesy of Candee Nourse, The Denver Post)
When he couldn't find the trail, he climbed down the steep north face of the mountain.
"It was basically a sheer cliff," Greg Nourse said.

The decision slowed Eric Nourse considerably. The next morning, 10 hours after his brother had left, Greg Nourse strapped his friend to an ice wall and climbed the mountain to find the easier trail down.

He waited near the summit for 2½ hours before the first climber of the day reached the peak so he could ask how to get down the mountain. While there, he called Reinhart's wife, Char, who set into motion an emergency response in Argentina.

"It was a really emotional phone call. She knew we were in trouble," he said.

Six hours later, Greg Nourse made it back down to the high camp. His brother limped into camp 90 minutes later, exhausted. Argentine EMTs advised Eric Nourse to climb down the mountain and not sleep. The oxygen content in his blood was dangerously low. Porters offered to carry their equipment down the mountain for them. But Greg Nourse said his brother felt that would have been admitting defeat.

"Eric wouldn't have any part of that. We carried our gear up the mountain, and after a little catnap he would carry it back down. He was never concerned about dying," Greg Nourse said.

Minutes after Eric Nourse went to sleep in his tent, emergency workers tried to rouse him. His heart rate dropped. When it stopped, they tried to resuscitate him. 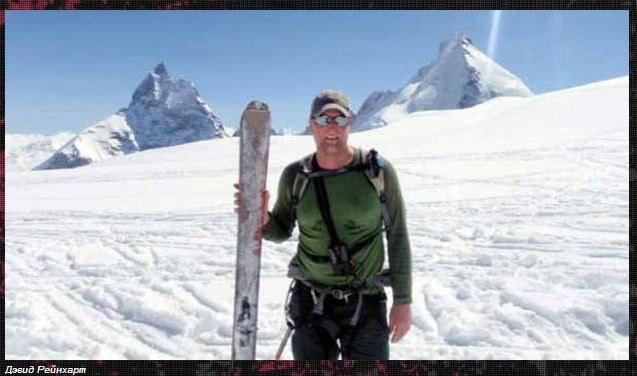 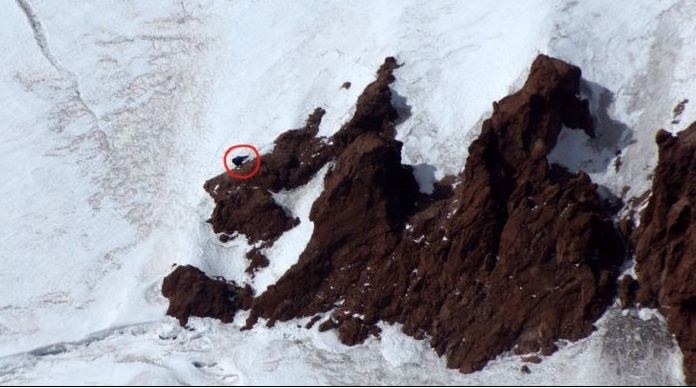 But he was dead.

It took another 2½ days before porters reached Reinhart's body on the glacier. Reinhart had somehow climbed another 150 feet up the mountain before collapsing. 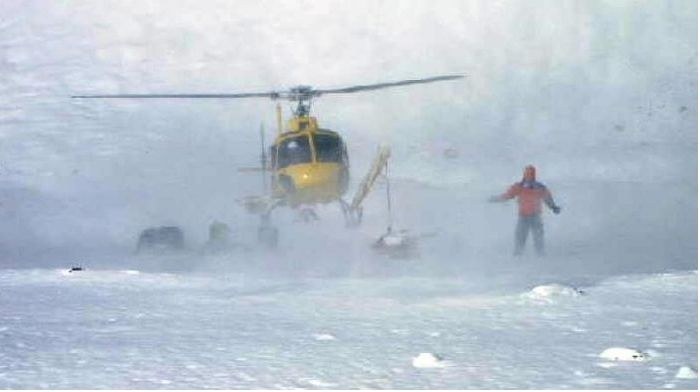 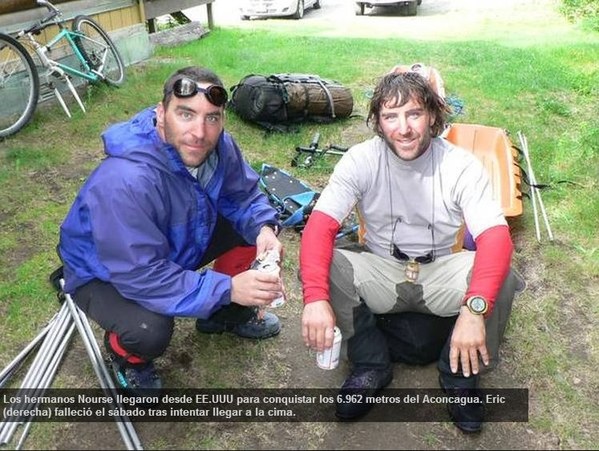 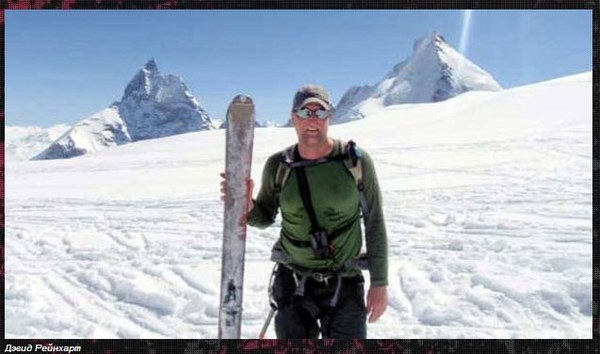 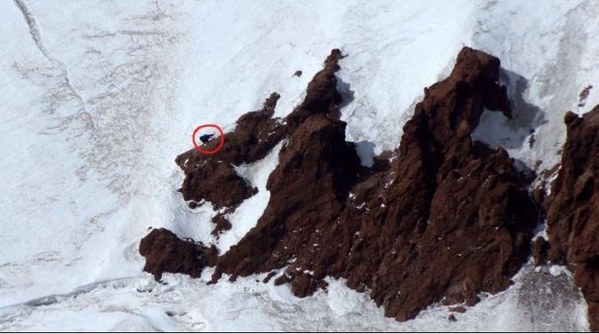