Mount Denali. On the 100th Anniversary of the Historic First Summit of Mt.McKinley (Denali), Descendants to Follow in Their Relatives' Footsteps on the 'Denali 2013 Centennial Climb' In 1913, 21-year old Alaska Native Walter Harper ...

On the 100th Anniversary of the Historic First Summit of Mt.McKinley (Denali), Descendants to Follow in Their

In 1913, 21-year old Alaska Native Walter Harper became the first man in history to reach the highest point in North America. Now, a century later, a team of descendants will follow the same path to the summit with the goal of inspiring Native Alaskan youth by sharing the story of this unheralded achievement.

This achievement is something young Alaska Natives can be very proud of, and it will help them believe that anything is possible. It’s also a story that should be shared with audiences around the world.

A team of descendants of the original expedition who first successfully climbed Mt. McKinley 100 years ago will attempt the same climb this spring, bearing a message of achievement to young Alaska Natives.

Dubbed the Denali 2013 Centennial Climb, Dana Wright, Ken Karstens, Ray Schuenemann, Dan Hopkins, and Mark Lattime will begin their ascent on June 7, 2013, a hundred years after their forebears reached Denali’s summit. Denali is the Alaska Native name for McKinley, meaning “The Great One.”

Wright is the great-grandnephew of Walter Harper, the 21-year old Athabascan who was the first person on Denali’s peak. Ken Karstens and Schuenemann, great-grandsons of Harry Karstens, who was second on the mountain and a team leader, will climb. Hopkins is the great-great nephew of Episcopal Archdeacon Hudson Stuck, who was also a team leader. Lattime, who is the Episcopal Bishop of Alaska, plans to hold a Eucharist on the mountain and honor the memory of Stuck.

The Centennial team will follow the same treacherous and complex route on the North Side of Denali through McGonagal Pass, and up the Muldrow Glacier and along Karstens Ridge into the great basin between Denali’s peaks.

The route foiled many attempts by previous expeditions before the 1913 summit, and was the only practicable route at the time. Modern mountaineers use the west buttress route from the airstrip on the Kahiltna Glacier.

The team particularly wants to note the achievements of Harper and John Fredson, a 16-year old Athabascan who lived off the land while caring for a team of sled dogs and the base camp for over a month alone waiting for the team to return, by sharing their adventure with young people via the Internet.

The team has partnered with FindingLife, a nonprofit organization that combines adventure, education, technology, film and charitable initiatives to inspire young people to create positive change. Participants will learn while interacting live online with expedition members, watch video webisodes from the mountain and follow the team’s progress via GPS tracking.

The National Congress of American Indians and the Alaska State Board of Education have endorsed the climb.

“This achievement is something young Alaska Natives can be very proud of, and it will help them believe that anything is possible,” said Mike Harper, grandnephew of Walter Harper. “It’s also a story that should be shared with audiences around the world.”

*For webisodes and to interact with the climbers, sign up for free at http://www.denali2013.org

*Donations towards the expedition can be made at http://www.firstgiving.com/fundraiser/denali-

Should Mount McKinley, the highest mountain in North America, be officially named as Denali -- its Athabascan name?

US Sen. Lisa Murkowski and others argue that Congress should officially recognize the Alaska Native name, particularly since President McKinley never set foot on Alaskan soil.

KILIMANJARO, regarded as the highest peak on the African Continent and the highest free standing mountain in the world has of late started to be taken for granted.

That is because limbless, handicapped and even little children have been announcing that it was quite easy for them to climb the giant feature right to the top and live to tell.

Then you also get women young and old, international pop stars and practically every Tom, Harry and Dick from any part of the region, country and globe thinking climbing to the 5900 metres highest point was easy as ABC, Do-Re-Mi or 1-2-3.

"But the mountain itself is alive," said one of the old veterans in the Kibosho area recently, adding that, the mountain can hear, remember and even kill should it be made angry. It was probably made angry last week when despite major preparations, worldwide announcements and presidential endorsement, a team of 100 pilots who planned to make history of being the first to paraglide from Uhuru peak got more than they bargained for.

Actually suffice to say that it is now official; nobody can ever fly from Mount Kilimanjaro using gliders; because those 100- plus international pilots recorded historical failure after attempting to perform the feat for 12 days, before deciding that it was hardly as easy as ABC or Do-Re- Mi.

The smitten team making up the maiden 'Wings of Kilimanjaro' paragliding adventure from Africa's highest peak, started their descent on foot in the night of Wednesday, February 6 and once on the ground, none of them was to be seen, probably were still nursing their 'wounds of defeat.'

The pompous and fanfare that accompanied them during their ascent were reduced to smitten state of reclusiveness and even as we went to press on Sunday, emails sent to the organizers for their statement were still not replied. Never mind, they are probably still recovering from the mountain hardships (but toddlers who climbed Kilimanjaro in past recovered faster), so they may soon respond ... all the way from Australia that is.

The pilots' team included some of the world renowned paragliding champions like Mr Robert (Bob) Gardner, Colin Downer, Angel Rivera, Colin Davies, Daniel Retz and Dr Fernando Davalos. The Tanzania National Parks through its Public Relations Manager, Mr Paschal Shelutete have admitted that, the Moshi based, Giant Mountain, towering at the height of 5900 metres, still had many surprises left for international climbers and it won't be defeated easily.

"Kilimanjaro has been attracting many climbers for years to an extent that people started taking it for granted, but we have just seen that there are many things that cannot be done easily from the world's tallest, free-standing mountain," said Mr Shelutete adding that the failure of expert gliders to fly from Uhuru peak should pose a new challenge that the entire globe should now try to accomplish.

On his part, the Chief Conservator for Kilimanjaro National Park, Mr Erastus Lufungulo, said the failed pioneer paragliding attempt on the mountain should prompt new studies and researches on how similar adventures can be accomplished successfully in future.

"The 100 pilots who took part in the 'Wings of Kilimanjaro,' organized event, happened to have been outstanding experts, some with world records, who have managed to conquer many mountains in the past but their failed attempt at Kilimanjaro goes to show that Tanzania has many surprises in store for global adventurers," said Mr Lufungulo.

According to the conservator, it took years before man could eventually reach the peak of Kilimanjaro and it may take more years before paragliding could ever be accomplished on the Mountain which records over 52,000 climbs in a year, the first recorded person to reach its summit was Mr Hans Meyer from Germany who peaked in 1889.

A new history and record was expected to be drafted last week, when the first batch of para-gliders were to fly from Uhuru peak and land in Kibosho but it never happened with them reporting gushing winds and claustrophobic cloud cover and of course mountain sickness.

The unpredictable weather and other mountain effects started to take toll on the climbers with many falling sick and cutting down the number from 100 to just 69 but when 20 more had to be rescued from the mountain it took the adventurers a few more hours before admitting defeat and trekking down via Mweka route. And that was the last to be heard of the Paragliders and even their manager Ms Paula McRae has gone AWOL, not responding to phones or emails. Goodbye Mountain Fliers! 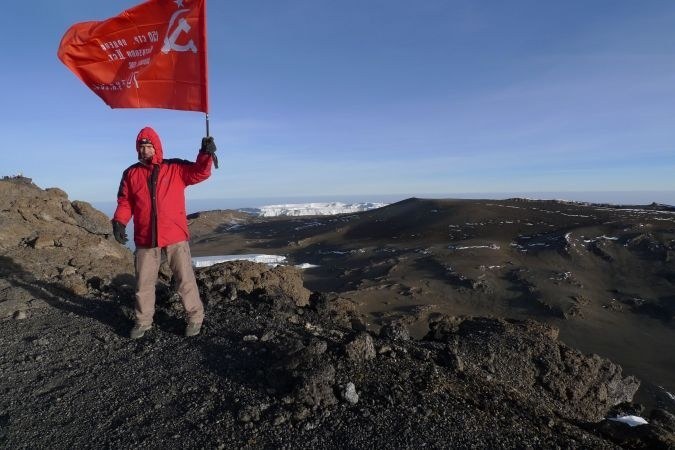