Test for mountains fans: popular mountain, could you recognize it?

We decided to diversify our communication within the 7 Summits Club. And we open on our site a section "tests and competitions." We hope that the participation on our tests help you better organize your knowledge of the mountains and ...

We decided to diversify our communication within the 7 Summits Club. And we open on our site a section "tests and competitions." We hope that the participation on our tests help you better organize your knowledge of the mountains and mountaineering. And, as a result, you will want to visit more mountains.

Popular peaks, all familiar mountains. But in an unusual view. Something you know firmly. And on something will need to think about. We invite everyone to test their knowledge

Jump to the test page by this link >>>>>>>
http://7summits-club.com/test_na_znanie_vershin/ 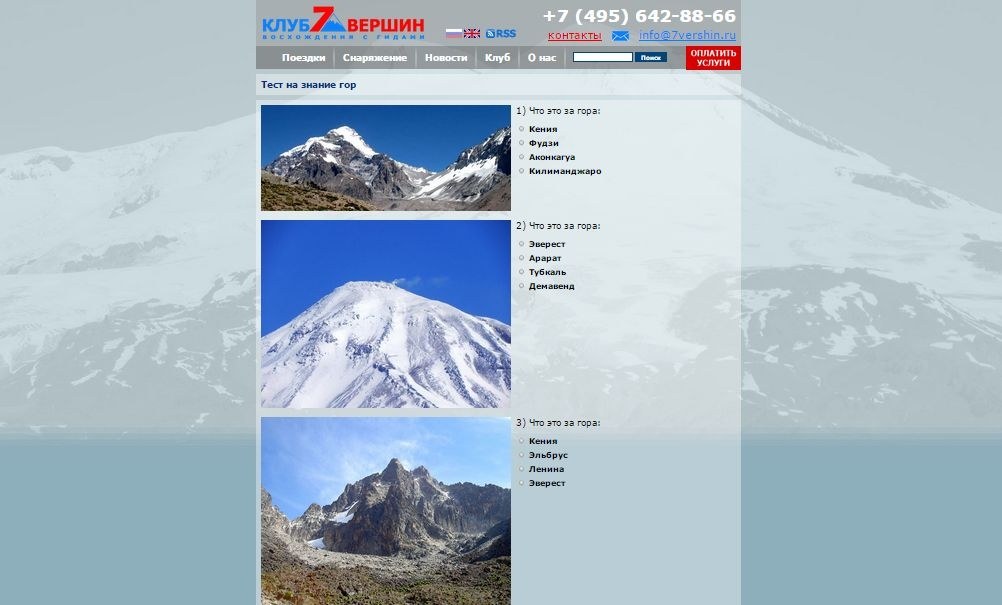 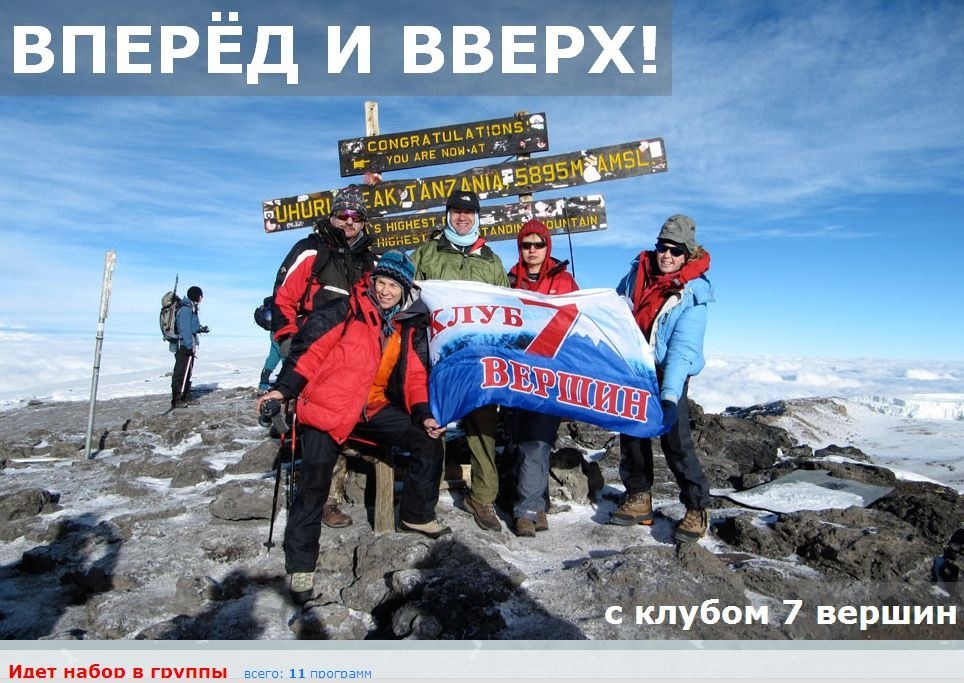 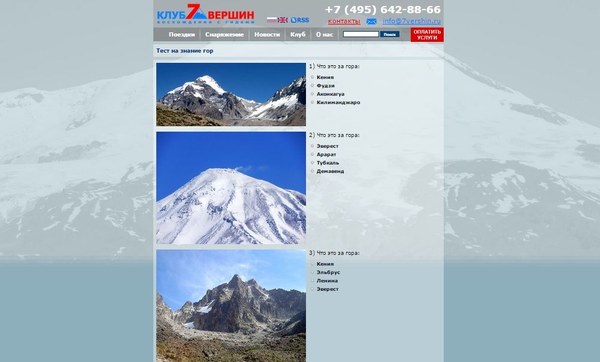 Valery Rozov headed to Africa’s highest mountain to open a new BASE exit – and not an easy one. http://www.redbull.com/     When it comes to aerial adventures, there are few athletes as accomplished as the ...

a new BASE exit – and not an easy one.

When it comes to aerial adventures, there are few athletes as accomplished as the Russian Valery Rozov. A champion climber, skydiver and wingsuit flyer, he's been pushing the boundaries of possibility for over two decades. Aged 50, he's still going strong and is just back from making the first BASE jump from Kilimanjaro – and it required an exit point that some might call 'challenging'. Below, he tells us how it differs from the challenge of Everest and why he can't wait to explore new exit points in remote mountains...

See the full story of Rozov's Kilimanjaro BASE below 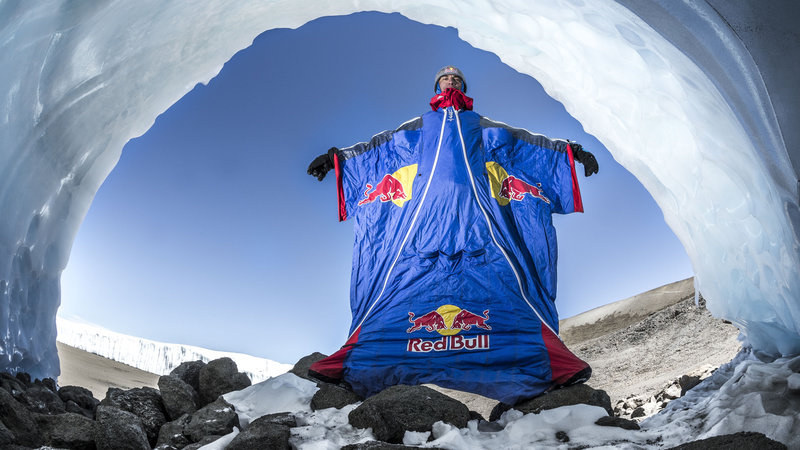 So how was it?

It was quite difficult for us. The wall was not vertical and so we spent some days trying to find a proper point to jump from. That was the most difficult problem. Another was the weather. There's no mountain around so it attracts clouds on the summit.

So how does Kilimanjaro compare to Everest?

It's totally different! Different cultures, different style of climbing, the weather. Everything! Everest in general is more difficult. It took so much more time and was more demanding physically due to the altitude. Also with Everest, I focused all my life on making this jump. It took two years to plan. When it happened I was super happy. 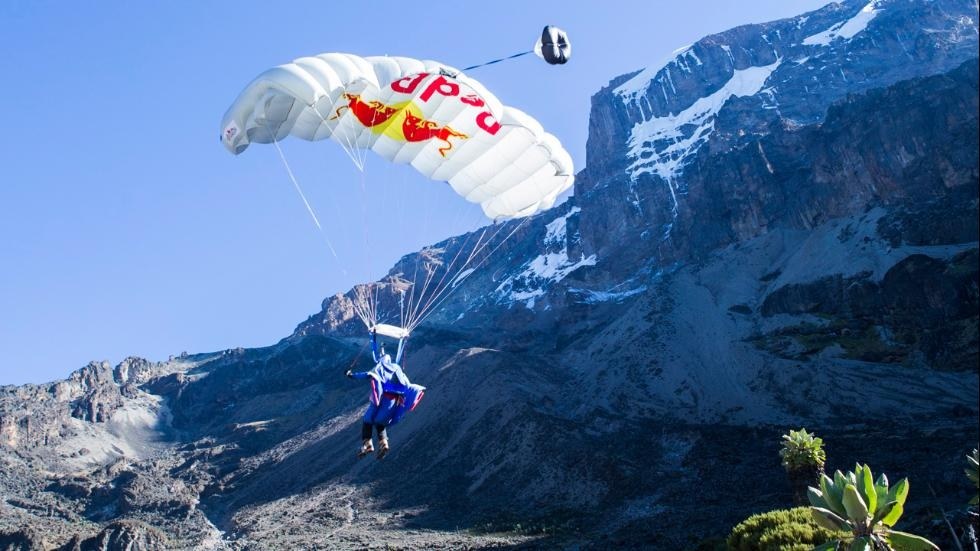 Valery Rozov comes into land after making historic wingsuit flight off the slopes of Kilimanjaro.

I have climbed and jumped from the highest suitable points of four continents: Changtse (Everest) in Asia, Elbrus, the highest point in Europe, Ulvetanna and Holtanna in Antarctica and now Kilimanjaro in Africa. Yes, I have a seven summits challenge – there's the Americas and Australia/Oceania still to do. But better to talk about it after I have done it!

Where do you get your kicks?

For many years I was a professional climber. Doing big jumps from big mountains is very interesting for me. Being the first to the top is important in mountaineering and it's the same with jumping. Being the first, it's an understandable motivation. The sports are a good combination and similar: the logistics, the climbing and then jumping. It's always an adventure which I like! 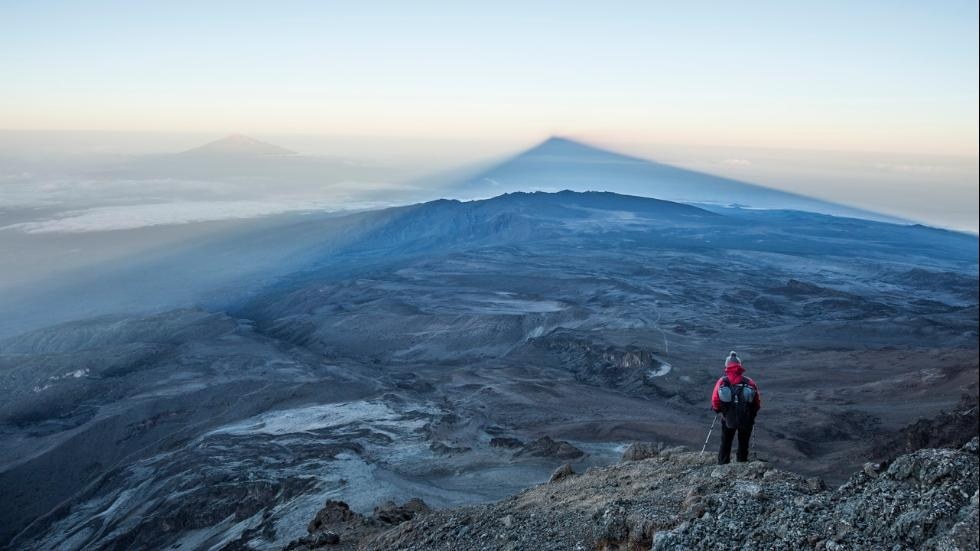 The shadow of Kilimanjaro, Africa's highest mountain, stretches into the distance.

What's next in the sport?

Jumping from new exits in big mountains will definitely be one of the most popular trends in the next years. Proximity flying? You know it's difficult for this to continue developing because it's very dangerous. A lot of people can do it so it's not unique. It just depends on how much risk you're prepared to take. Technically, it's not that difficult now – it's just a question of risk. I like proximity flying but to focus on it professionally does not make sense for me. 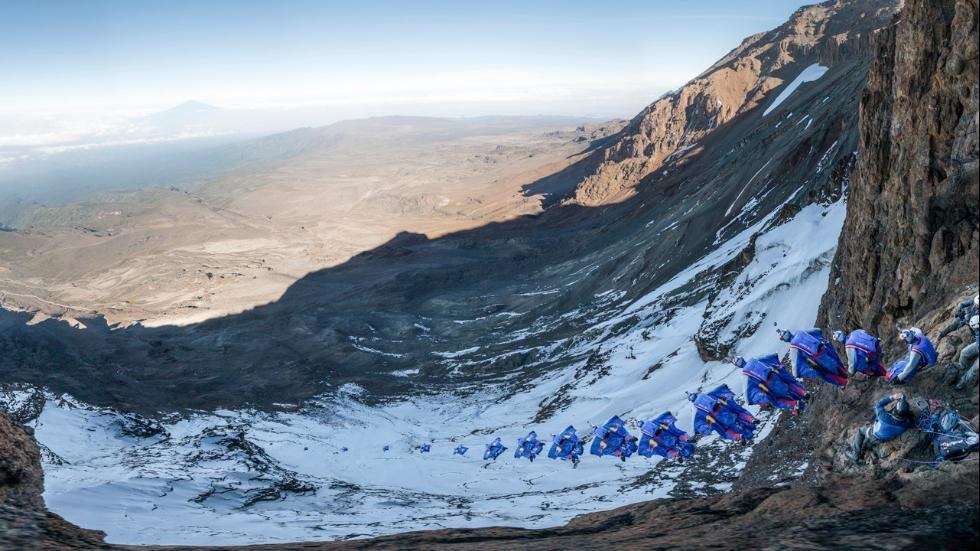 Sequence shot of Valery Rozov making the first ever BASE jump and wingsuit flight from the slopes of Kilimanjaro, Africa's highest mountain.

You're 50. For how much longer will you keep doing this stuff? 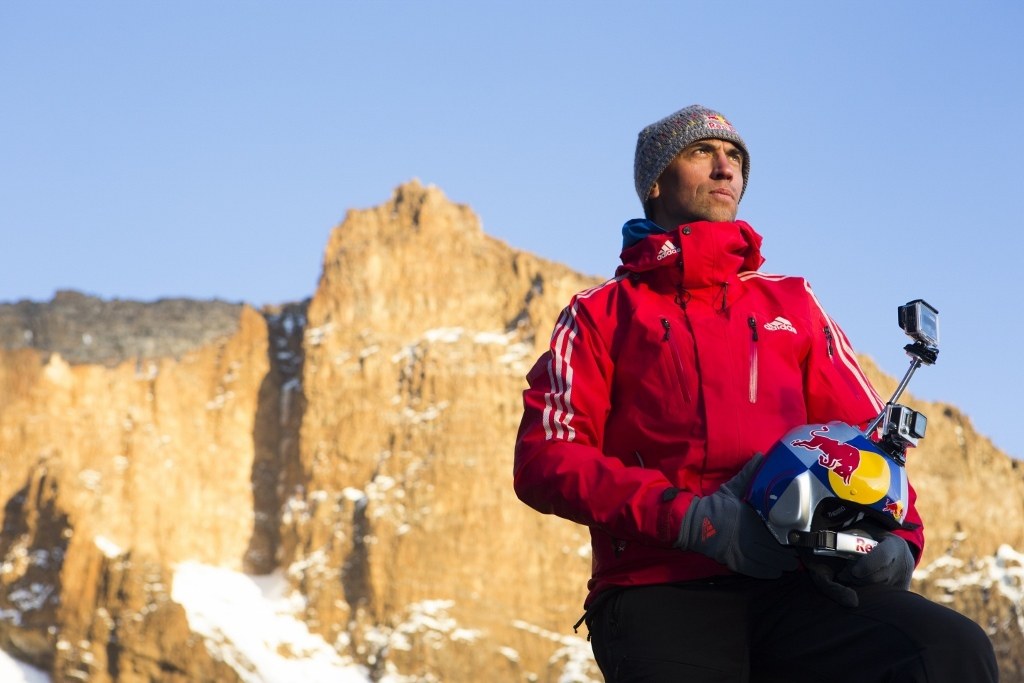 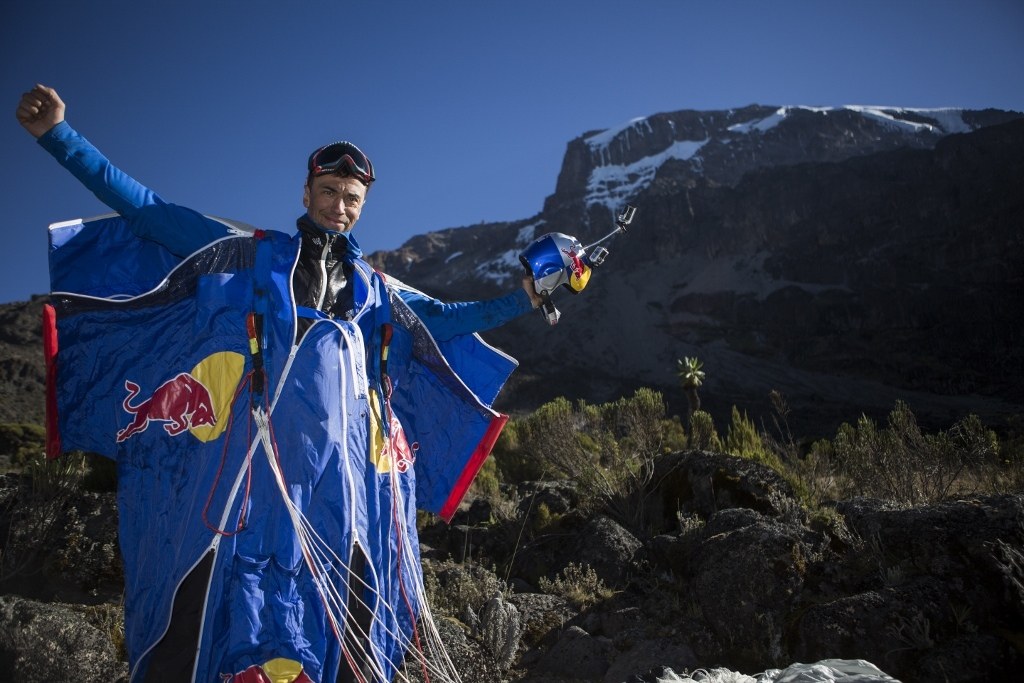 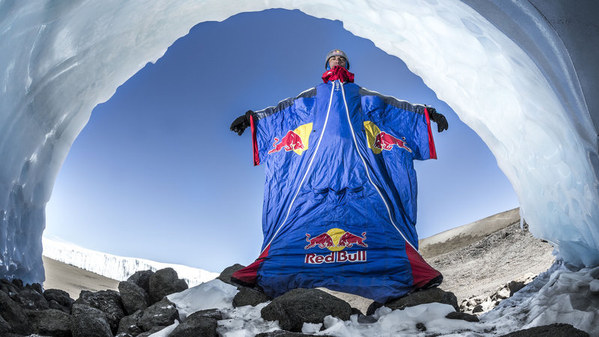 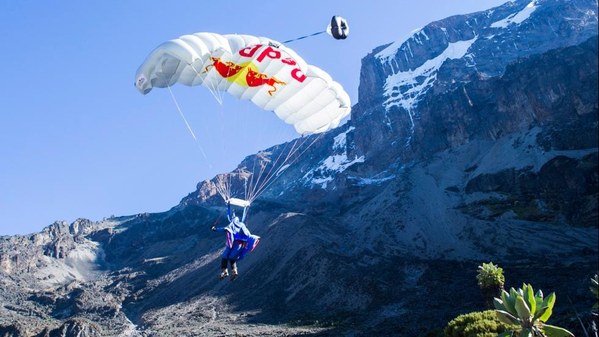 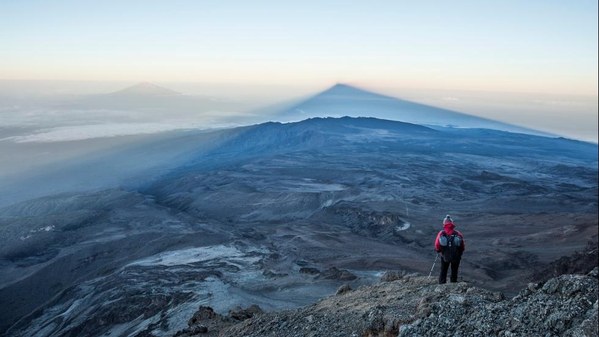