KATHMANDU — Two elite mountaineers will next month attempt to climb one of the deadliest Himalayan peaks, Annapurna, as they vie to become the first woman to scale the world's 14 highest mountains.

South Korea's Oh Eun-Sun and Edurne Pasaban from Spain are among a handful of female climbers competing to be the first female to reach the summit of every mountain over 8,000 metres (26,247 feet).

Italy's Reinhold Messner became the first person to climb all 14 peaks in 1986, but the record has never been equalled by a woman, and Oh and Pasaban are both hoping to make the history books this year.

Oh is the closest to achieving the record with 13 of the 14 peaks -- all of which are in the Himalaya and Karakorum mountain ranges -- already under her belt.

"If I manage to do this I will be incredibly proud, not just for myself but for my country and for Asia," the 43-year-old South Korean told AFP after arriving in the Nepalese capital Kathmandu for the expedition.

"I don't know why no female climber has managed it. I suppose it is down to women's position in the world, which is still not the same as men's."

Oh's chief rival, Pasaban, has two mountains left to climb -- Annapurna and Shisha Pangma in China's Tibet region -- and hopes to attempt both in the brief April-May pre-monsoon season, when weather conditions are favourable.

She had hoped to travel to Tibet first, allowing her to acclimatise before attempting the more difficult Annapurna later in the season.

The 8,091-metre mountain is particularly dangerous because it is both technically difficult and avalanche-prone, and it has a much higher death rate than Everest. 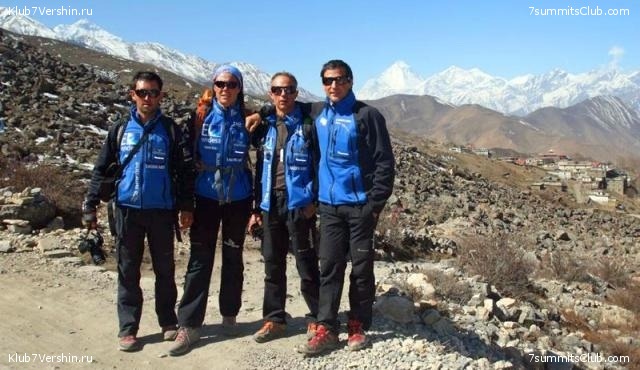 But the Chinese authorities refused her permission to travel there this month, leaving her with no choice but to attempt Annapurna next.

Other competitors for the record are Austria's Gerlinde Kaltenbrunner and Nives Meroi of Italy.

Kaltenbrunner failed in August in a bid to climb the 8,611-metre K2, the world's second highest peak, situated on the Pakistan-China border and regarded as the most difficult of all the eight-thousanders.

She remains at 12 summits, and must still scale Everest on the Nepal-China border, which at 8,848 metres is the world's highest peak. Meroi has conquered 11.

Like Oh, Pasaban has been defeated by Annapurna once before, in 2007 when she and her team turned back about 1,000 metres from the summit in bad weather.

"Annapurna is difficult and dangerous. Some people say it's the most dangerous of them all, and many of my friends have died there. So I go with a little fear," she said in an interview with AFP in Kathmandu.

"If I wasn't trying to do this, I probably wouldn't attempt it. But all my life has been about the eight-thousanders."

Both women will attempt the climb in early April, after spending a month at altitude to acclimatise and train for the task ahead.

Pasaban, 36, who never uses oxygen on her expeditions, admits she has given up much for her sport -- more, perhaps, than her male counterparts.

"The years between 30 and 40 are the best ones for a female climber, but they are also the years that our culture dictates that we should spend having a family," she said.

"A few years ago I faced a lot of family pressure to settle down, and I became quite depressed. But now I am very clear about my goals."

Pasaban admits it will now be hard to beat Oh to the record, although she hints that her South Korean rival's sponsorship deals may have given her an advantage.

Unlike Pasaban, Oh will travel by helicopter to base camp, and have all her ropes set up for her before she arrives.

"Many people speak about competition in the mountains. I think it would have been nice for us to arrive at the top together," said Pasaban.

"But we have decided to climb separately. The mountain will put us in our places."