The Basque mountaineer Alberto Iñurrategi has just completed a committing traverse of all three Broad Peak summits, beginning with a new route to Broad Peak North. 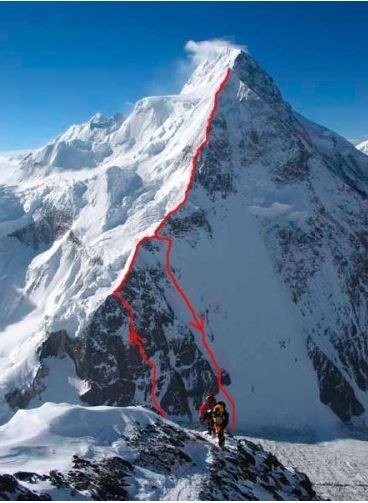 In 1984 the legendary Polish mountaineers Jerzy Kukuczka and Wojiech Kurtyka, in alpine-style and with no previous attempt, climbed the difficult North West Ridge of Broad Peak North and continued over the Central to Main summit in four and a half days.

This was only the second time that both the North and Central summits had been climbed.

In 1995 the same route was taken by Japanese, Toru Hattori, Toshiyuki Kitamura and Masafumi Todaka, who also climbed in alpine style and completed the round trip from base camp in seven days. Todaka was actually on honeymoon with his wife, who remained at base during the ascent.

On the 9th July Alberto Iñurrategi, Juan Vallejo and Mikel Zabalza reached the summit of Broad Peak North after climbing a new line up the west-facing glaciated slopes leading directly to the 7,350m col between the North and Central summits.

The weather was very windy and they spent a rough night back at the col after a short ascent of the South Ridge of North Peak. Next day they were faced with the hardest section of the traverse, the ascent of the North Ridge of Central Peak.

Receiving a weather forecast that confirmed these strong winds would continue to prevail for the next two days, the three decided to return to base camp.

The Basque trio set out again on the 16th, regained the col on the 17th after a bivouac at c6,300m, and the same day Iñurrategi repeated their previous ascent of the South Ridge to the summit of Broad Peak North.

Next day they left at 3:00 am, expecting that it would take 11-12 hours to reach the summit of Broad Peak Central and descend to a bivouac on the 7,800m col before the Main Summit.

They were wrong. Although they climbed the first 400m of the ridge in two hours, it took another 10 to finish the remaining 300m, and then two more to negotiate the summit ridge.

Snow conditions were abysmal and at one point they took five hours to gain only 50m of elevation. All declared it was the worst snow they had ever experienced.

By the time they got to the 7,800m col, they had been on the go for 17 hours, were exhausted and, having travelled very light, were completely out of food. As it was nearly dark, they decided to descend to Camp 3 at 7,100m on the Normal Route.

After just seven hours rest, only Iñurrategi felt like getting up at 3:00 am and going for the Main Summit. It took him six hours, in an exhausted state and suffering from stomach pains, to reach the top. The saving grace was that he was able to follow the track opened by other climbers on the Normal Route several days previously.

He regained camp in just over four hours. As testament to the outstanding ability of this climber at high altitude, his time was faster than most fresh and well-provisioned mountaineers would clock for this section when reaching the top via the Normal Route.

In 2002 Iñurrategi became the 10th man to complete all 14, 8,000m peaks, but only the fourth to do so without supplementary oxygen.