MLAE-2011 is organized under the patronage of Arthur Chilingarov – Special representative of President of Russian Federation for international cooperation in the Arctic and the Antarctic.

During previous expedition MLAE-2009 – seven-men crew in two automobiles “Yemelya-1” and “Yemelya-2” under the leadership of Vasily Elagin had started from Severnaya Zemlya, Russia and after 38 days and 2033 km of driving over drift ice for the first time in history of Arctic exploration reached the North Pole by car. It happened April 26, 2009 and now this achievement is included into Russian Book of Records.

This year 2011 our team wants to start after March 3 from town of Urengoy in Yamalo-Nenetskij Autonomous Region of Russia and drive up to North Pole until April 20 and further to Ward Hunt Island, Canada by May 26 and finish in the town of Resolute, Nunavut, Canada by May 31 plus a few days spare. From Resolute Bay we shall fly to Montreal to visit our volunteer coordinator Ilya Kovalev and stay a few days in his apartment before we can fly home to Moscow. 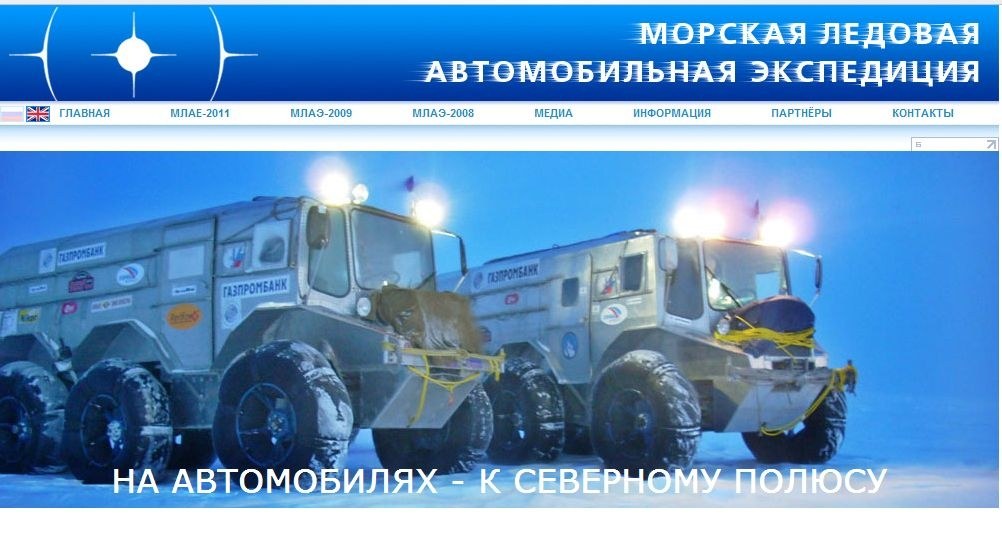 Specially designed for the harsh Arctic environment, amphibious truck Yemelia can negotiate ice hummocks, ice fields and thin ice of the Arctic Ocean. It’s a 6х6 all-wheel drive vehicle with Diesel engines and trailers. The six wheels are “shod” in special shell tires; the air pressure is just 0.005 atm. The laden mass is under 1.5 tonnes, while total displacement of all six shell tires is almost 5 tonnes. Accordingly, the truck’s body submerges just by ten centimetres. The vehicle can sail in open water at 2-3 km/h driven by the rotating wheels, despite the significant windage of the body. Each truck will be towing two single-axis trailers, each carrying a 200-litre fuel tank and six 100-litre plastic barrels with food and equipment. Since the engines, transmission and all electrical equipment are placed inside the waterproof truck body, Yemelia is perfectly capable of sailing in salt water. The vehicle has a spacious heated and insulated cabin – a reliable, long-term home for the polar travellers.

SEA-ICE CARS EXPEDITION in March-April 2009, traveled by car from the Northern Earth to the North Pole. On the island Middle of Archipelago Northern Earth men and equipment were flown Aviation Administration Federal Security Service of Russia. The expedition started in half past 12 AM (Moscow time) on March 20, 2009 from a base station «Island Golomyanny». After passing over the island Medium and Strait of the Red Army and went to the ice of the Laptev Sea expedition has headed for the North Pole. Members of the expedition moved on a floating ice of the Arctic Ocean on cars-amphibians«Emelya 1» and «Emelya 2» design engineer Elagina equipped with wheels with tires of low pressure. Members of the expedition MLAE-2009: Vasily Elagin Athanassi Makovnev, Vladimir Obihod, Sergey Larin, Alexey Shkrabkin, Alexey Ushakov, Nikolai Nikulshin. For 38 days there are passed on cars more than 2000 km.The average air temperature on the route to the Pole was minus 35-45 degrees Celsius. There were strong winds from the east and north, the counter and lateral drift (0,4-1,5 km / hour). Operational headquarters of the Office of Aviation Russian FSB in order to ensure the safety of participants was conducted daily monitoring of movement of cars of expedition on a route. 26 April 2009 at 17.30 Moscow time on a satellite navigator expedition leader Vasily Yelagin to light coordinates 90° 00,000 'north latitude. The North Pole was reached.