Age be damned. An elderly Vancouver couple successfully climbed Africa's highest mountain, becoming the oldest known couple to do so.

Esther Kafer, 84, and her husband Martin, 85, reached the summit of Mount Kilimanjaro Wednesday, according to the Alzheimer's Society of B.C. Their achievement has yet to be verified by Guinness World Record officials. The Tanzanian mountain is 5,885 metres high (19,341 feet).

Motivated by the rapid rate Martin's sister's dementia was advancing, the couple took part in the climb to help raise money for the Alzheimer's Society of B.C.

"Each time we visit Martin’s sister we are overwhelmed by the telling signs of the rapid rate her dementia is advancing," the pair said on the society's website. They point out that the former researcher and McGill professor is now "reduced to incoherent words... a sad hulk of a mind" and needs 24-hour care.

Married since 1953, the Kafers have spent their lives travelling the world, climbing mountains, and skiing.

"Esther and Martin's achievement epitomizes the spirit of the Ascent for Alzheimer's event, which is that no matter how challenging the journey there is support," said Jean Black, CEO of the Alzheimer Society of B.C.

Eager to obtain international work experience, the self-described "old-timer mountaineers and life-long outdoor enthusiasts" immigrated to Canada in 1954 from Switzerland and never looked back.

When asked to provide advice for those with more sedentary lifestyles, both champion fit, active lives and sharp mental acuity.

"Be active all of the time, eat well, use your arms your legs and your head. Most of all your head. Take every day as a bonus day," the Kafers told Canadian Achievers.

The Kafers helped to raise more than $24,000 for the Alzheimer's Society of B.C. 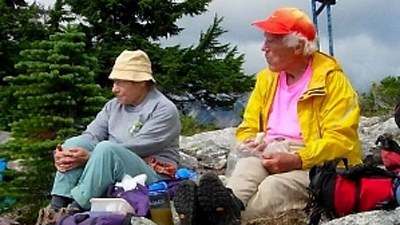 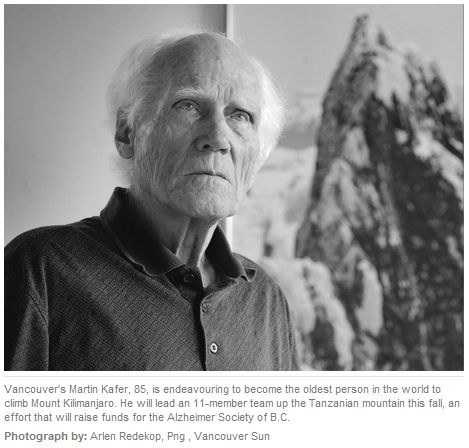