Our sincere condolences to his wife Barbara and sons! Unfortunately, we didn't meet Lincoln more after expedition of 2006. We saw him in the film, read the book and thought that sometime the destiny will bring together us in Katmandu or in Sydney. Alas, the ruthless illness deprived of us such possibility. Lincoln Hall disappeared in history and took in it the worthy place. 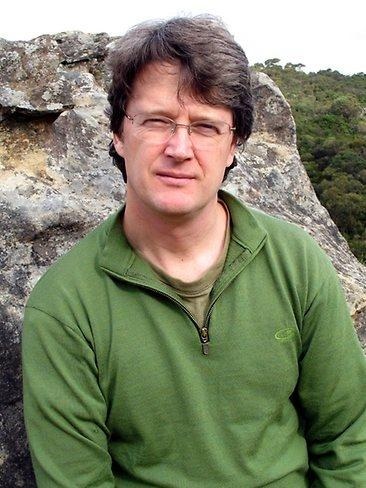 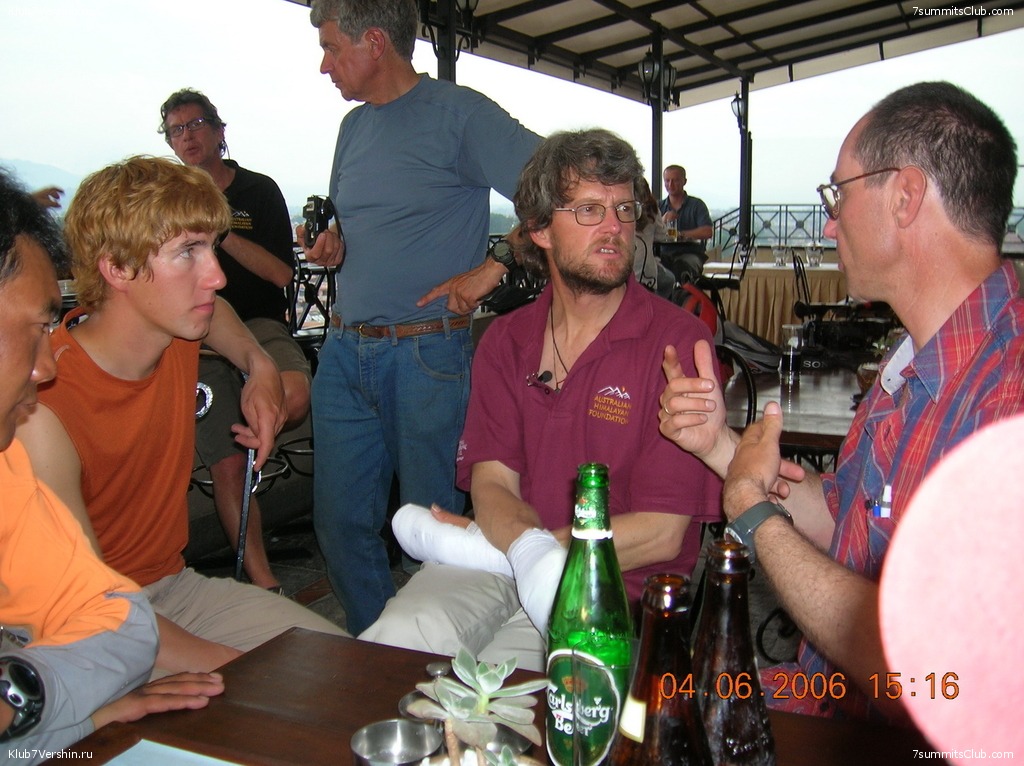 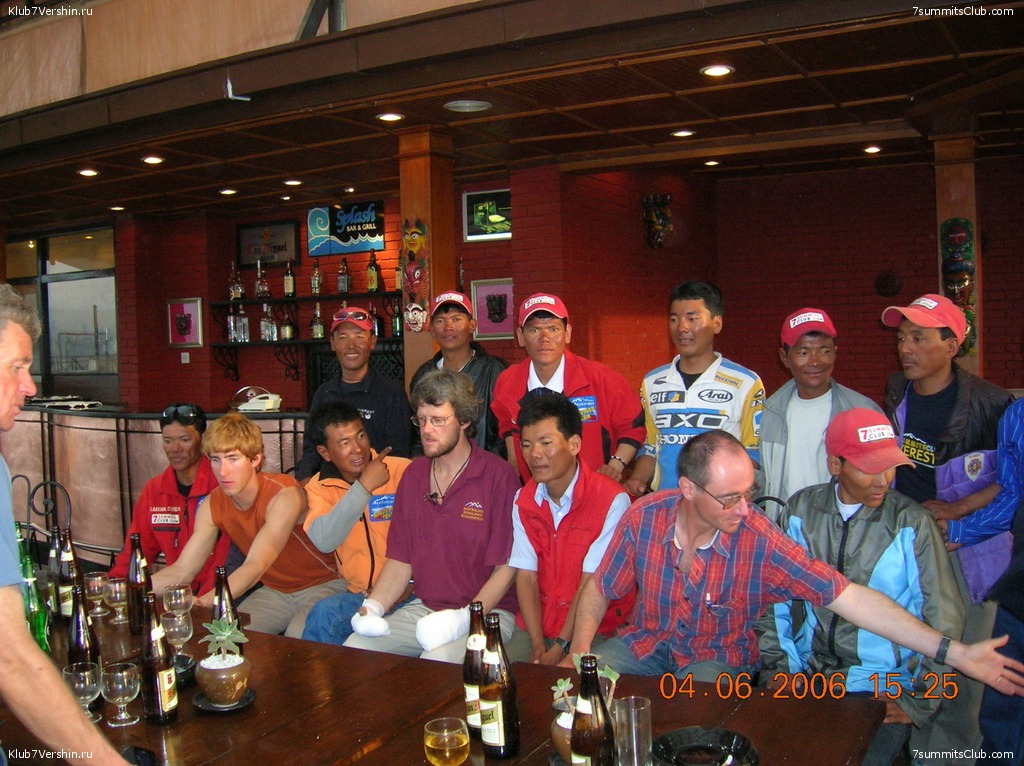 His wife Barbara and long-time friends and fellow mountaineers Tenzing Sherpa and Greg Mortimer were with him. Greg, the Australian Geographic Society's deputy chairman, phoned this morning to deliver the sad news.

"It was very peaceful in the end, around 11.45 last night," Greg said. "Lincoln got into quiet, rhythmic breathing - it was almost meditative - and then he quietly slipped away."

A brilliant, witty and open-hearted man, Lincoln was a key member of the 1984 Australian Everest Expedition that put the first two Aussies - Tim Macartney-Snape and Greg Mortimer - atop the world's highest mountain, and came within a few hundred metres of the summit himself. Lincoln's story of the expedition, White Limbo, is a classic of mountaineering writing and one of the best known of his several books. His successful 2006 climb of Mt Everest and famous survival epic after being left alone above 8000m in caught worldwide attention. His account of the story, Dead Lucky, was published in 2007.

Lincoln served on Australian Geographic's original editorial advisory panel in the 1980s, wrote several stories for the journal and was a great supporter of the AG Society and other Australian adventurers. His service to adventure was recognised by the Society in 2010, when he was presented with the Lifetime of Adventure award. He was also a founding director of the Australian Himalayan Foundation, which strives to improve education, health and environmental outcomes for people of the Himalaya region.

"I was lucky enough to walk with Lincoln in the Everest region in Nepal a few years ago and it's a trip I'll never forget," said AG editor and Society trustee Ian Connellan. "He was so funny and warm, and had such a wonderful, open, uncomplicated honesty. I'm terribly sad to know that I won't get to laugh with him again."

AUSTRALIAN mountain climber Lincoln Hall has died from mesothelioma. He was 56.

His wife, sons and close friend and fellow mountaineer Greg Mortimer were with him. 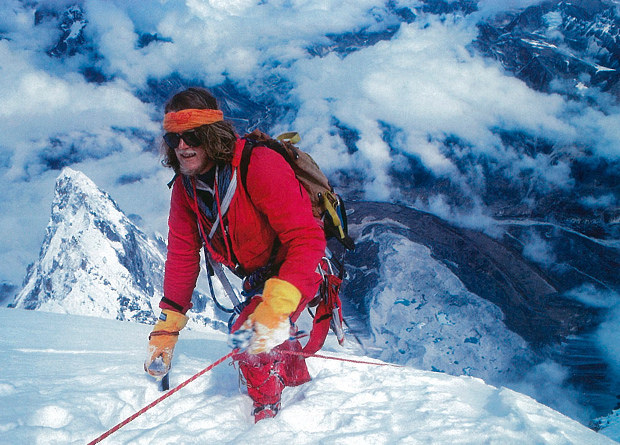 Australian mountaineer Lincoln Hall with his wife Barbara in the Nepali capital after his rescue.

''Lincoln was well-known for his feat of survival on Everest in 2006, when, after summitting the mountain he collapsed just below the summit and had apparently died, only to be found alive the next morning by climbers on their way up the mountain,'' Mr Balderstone said.

Mr Hall's lawyer, Theodora Ahilas, from Maurice Blackburn, which recently concluded an asbestos compensation claim for Mr Hall, said his disease was allegedly linked to asbestos exposure as a child.

''Lincoln was an amazing man who was able to remember a remarkable amount of detail about his exposure to asbestos as a child,'' she said. ''It was alleged that in 1965 and 1966, Mr Hall assisted his father to build two cubby houses using asbestos cement flat sheets on their property in Red Hill in the ACT.''

Canberra Climbers' Association president Zac Zaharias said Mr Hall would always be regarded as a prominent climber. He said Mr Hall would be remembered not only for his amazing feats on Everest, but for his drive and moving writing.

He was also a compassionate man in his role as director of the Australian Himalayan Foundation, set up to help impoverished communities, he said.

In 2006, a rescue team of sherpas helped the veteran climber descend 1700 metres from where he had collapsed after a successful climb to the summit. It had been reported 24 hours earlier that Mr Hall had died on the mountain.

He had to be carried over several obstacles and restrained when he became delirious from altitude sickness. But word got back from the highest camp on the peak that he had walked the last few hundred metres into North Col camp before collapsing. He was left for dead on the mountain at 8700 metres when he broke down while descending from the 8848-metre summit. Those with him could not move him after he became delirious, a sign of oedema, or fluid on the brain. His companions in a Russian-led expedition were forced to leave him on the mountain overnight.

The next morning another group of climbers found him, still clinging to life, and a rescue party brought him down.

In a 2007 interview on ABC TV's Enough Rope, Mr Hall said he was attracted to climbing mountains because of the physical dangers, but also the challenges, like ''mental fortitude, physical fortitude, judgment''.

''It's the intensity of the experience, at a sustained level. The experience is incredibly intense because it is so dangerous,'' Mr Hall said. Away from the mountains, Mr Hall said his wife and their two sons made ''the world go round''.

Asked how she felt when her husband left the family to go climbing, his wife, Barbara Scanlan, said she knew she could never change that part of him. ''I guess climbing and, more so, mountaineering is such an integral part of Lincoln and what makes him tick,'' she said.